From: A Reader In The Former British Empire [Email him]

John Derbyshire writes on the expansion of the “Cuckservative” meme:

I spotted the word “Cuckstians” in some comment thread, referring to Christians whose faith leads them out into missionary endeavors among people—preferably African—who accept their aid packages and medicines while laughing at the missionaries’ naive idealism when their backs are turned. Fair enough, I suppose, but I doubt “Cuckstians” will catch on: too hard to pronounce.

How about Cuck Lit.? Vanity Fair comes to mind, and Gone With the Wind. The memory’s dim, but I think The Wife of Bath’s Tale gets in there, too. And recalling the plot of Seeing Calvin Coolidge in a Dream, I think I may have contributed to the Cuck Lit. genre myself. 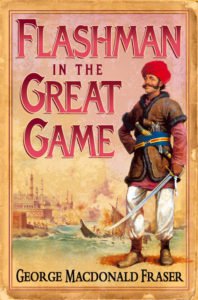 When Derb referred to “Christians whose faith leads them out into missionary endeavors among people—preferably African—who accept their aid packages and medicines while laughing at the missionaries’ naive idealism when their backs are turned”, he reminded me of the scene in Flashman In The Great Game, where Harry Flashman, having ended up disguised as a Pathan serving in the Meerut garrison just before the outbreak of the Indian Mutiny in 1857.

Flashman (see Flashman and the Politically Correct and Flashman, Ron Paul, James Kirchick—And Liberty) describes a scene where an English vicar preached to  the sepoys (native Indian soldiers) on the Parable of the Prodigal Son, through a native (Muslim) NCO interpreter, who made fun of the story

“There was a zamindar,with two sons. He was a mad zamindar, for while he yet a lived he gave to the younger his portion of the inheritance. Doubtless he raised it from moneylender. And the younger spent it all whoring in the bazaar, and drinking sherab. And when his money was gone he returned home, and his father ran to meet him, for he was pleased—God alone knows why. And in his foolishness, the father slew his only cow—he was evidently not a Hindoo—and they feasted on it. And the older son, who had been dutiful and stayed at home, was jealous, I cannot tell for what reason, unless the cow was to have been part of his inheritance. But his father, who did not like him, rebuked the older son. This story was told by Jesus the Jew, and if you believe it you will not go to Paradise, but instead will sit on the right-hand side of the English Lord God Sahib who lives in Calcutta. And there you will play musical instruments, by order of the Sirkar. Parade—dismiss!”

Flashman said  he had never felt so embarrassed for his church and country in his life.

Is that an example of anti-Cuck Lit?