A Genetic Census of America 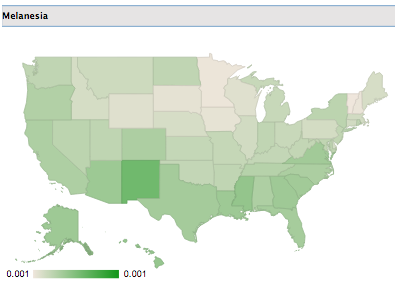 Via Race / History / Evolution Notes, here are Ancestry.com's interesting maps of racial ancestry by state: A Genetic Census of America. One pattern I noticed is that the more odd the background (as with this map of Melanesian ancestry, which tops out at 0.1%), the more New Mexico stands out (with New York as the other state most likely to be anomalous).

I'd call it the Law of Newness, but it doesn't much apply to New Hampshire, with New Jersey kind of in the middle.

Since we've been speaking of German-Americans, here's "Europe West," which presumably includes Germans, Dutch, Belgians, and French (but not Scandinavians, Brits, Irish, Iberians, or Italians): 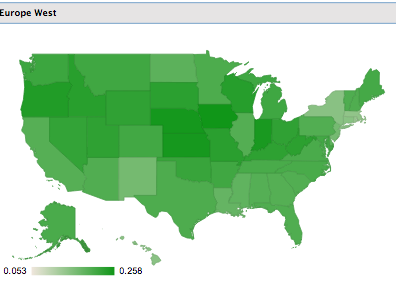 Generally, most of the country is kind of German, but less so in the giant cities like New York, Chicago, and Los Angeles. Or New Mexico.