A Crusade For Jennifer Rubin: "Mr. Netanyahu, Tear Down This Fence!"

Since Jennifer Rubin, who scribes the "Right Turn" column for the Washington Post, is so ardent for immigration in America, I've found a great new cause for her: demanding that Prime Minister Benjamin Netanyahu tear down the brand new Israeli border fence that is so effective at keeping out illegal immigrants from Africa:

From the Jewish Press this week:

Prime Minister Binyamin Netanyahu and his wife Sara visited the Great Wall of China on Thursday, allowing him to make the obvious comparison with Israel’s security fence, dubbed by leftists as the “Apartheid Wall.

Unlike the Chinese Great Wall, the “wall” in Israel extends less than 10 percent of the total length of the fortification, the rest of which is a fence. ...

He said the Great Wall inspired him as Israel built the security fence along the southern border with Egypt. 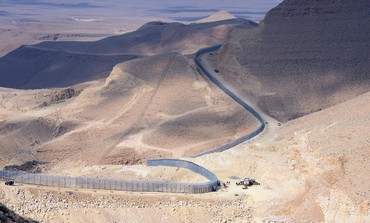 “There has not been an engineering feat in Israel this large since the days of Herod,” Prime Minister Binyamin Netanyahu said on Wednesday on a tour of the newly completed 230-km. fence along the Sinai border.

Netanyahu, who was shepherded through the massive, NIS 1.6 billion project, said the model will now be duplicated on the Golan Heights border with Syria, and later on the country’s eastern frontier.

“I think that the success here tells us that we need to complete the work on the other borders, and in the future we will close all of Israel’s borders,” he said.

Deputy Chief of Staff Maj.-Gen. Yair Naveh said a similar barrier on the frontier with Syria was in the process of being built, and should be finished by the middle of the summer to “preempt the possibility of terrorist attacks against communities on the Golan Heights.”

Work on the five-meter-high southern fence began in November 2010, and Netanyahu – who is touting the project as one of the major achievements of his current tenure – has taken helicopter visits to various points along the border to gauge the pace of work being done since then.

Nevertheless, another 13 km. in mountainous terrain near Eilat still needs to be built. When that is completed in an estimated three months’ time, the long stretch of border from Kerem Shalom, where Sinai and Israel meet the Gaza Strip, to Taba, on the Red Sea, will be sealed.

Brig.-Gen. Eran Ofir, head of the project, told the prime minister that “just as the Iron Dome defends Israel’s skies, the fence is an iron wall defending Israel’s border.”

Netanyahu said the fence had two primary objectives. The first was to stop the flood of African migrants into the country, which he said would – had it not been stemmed – have posed a strategic threat to the country.

The prime minister said that at the height of efforts to infiltrate the border last January, some 2,300 people were making their way across the border each month. That number dropped to 36 in December.

Just as Israel succeeded in stemming the influx of migrants, he added, it will also succeed in sending those already here back to their lands of origin. There are an estimated 60,000 African migrants here, some 40,000 of them from Eritrea and Sudan, countries to which Israel is unable to deport them.

Netanyahu last month appointed former Mossad official Hagai Hadas to spearhead efforts to send the migrants back home. He did not, however, provide any details on how those efforts were proceeding, or which countries would be willing to take the migrants in.

According to Defense Ministry numbers, the new fence was built with 45,000 tons of steel, and enough earth was moved during construction to fill 1.67 million trucks.

Some 100 contractors were involved in the project, employing more than 1,000 people who – at times – worked around the clock to finish ahead of deadline.

The Defense Ministry said the fence was attracting interest from other countries facing similar challenges from illegal infiltration, smuggling and terrorism. The barrier includes the 5-meter steel fence itself, as well as a more rudimentary barbed wire fence in front of it, a sand road for tracking, a patrol path, and communications infrastructure including information collection points, cameras and state-of-the art radar.

As I've been saying for years, there is much that Americans can learn from Israel.