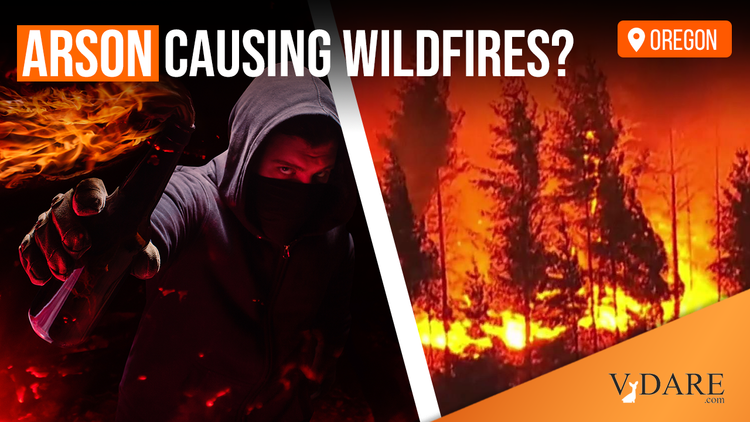 100 Days of Riotous Arson in Portland Attracted Firebugs. Now, Oregon Is on Fire. Is There a Link? Not If You Believe The NYT!

Some tiny percentage of the population are hardcore arsonists who like to start fires, the bigger the better. The 100+ days of Antifa riots in Portland has no doubt attracted arsonists from across the country who enjoy practicing their fetish with impunity.

Is there any connection between the countless examples of arson in downtown Portland and the wildfires in Oregon? ABSOLUTELY NOT says The Establishment. From the New York Times:

In Oregon, a Year of Political Tumult Extends to Devastating Wildfires
A tumultuous summer of protests has become a complication in the wildfires raging around Portland.

MOLALLA, Ore. — Ralph Mitchell’s neighbors were fleeing. Ash rained from the sky. And outside Mr. Mitchell’s natural-medicine business, a police cruiser announced on loudspeaker: “This has been declared a life-threatening fire emergency. You need to evacuate the city.”

Mr. Mitchell was having none of it. He was staying.

“There’s already reports that antifa’s in town, going down the streets looting,” he said, echoing widely discredited rumors on Twitter and Facebook that left-wing activists had been systematically setting blazes. “I’m getting texts.”

Every natural disaster has its holdouts. But the political fear-stoking that accompanied a tumultuous summer of racial-justice protests in Oregon has become a volatile new complication in the catastrophic wildfires that pushed closer to Portland on Friday, as authorities try to evacuate hundreds of thousands of people.

Law enforcement officials across the state said they had been swamped with calls about social media misinformation and begged people to “STOP. SPREADING. RUMORS!” In the line of fire, the swirl of rumors actually helped goad some people into defying evacuation orders so they could stay and guard their homes.

… The other was the imagined invasion of left-wing mobs and arsonists that multiple law-enforcement agencies have sought to refute….

The rumors played into some conservative residents’ fears and anger over months of protests in Portland, where left-wing and right-wing groups have occasionally clashed.

What has been happening in Portland since May is protests, “where left-wing and right-wing groups have occasionally clashed.” Not nightly recreational arson by Antifa.

Here in Southern California, arsonists set a substantial but not a majority of brushfires, although it’s often hard to tell arson from incompetence, which Southern California has no shortage of: I started a campfire in 100 degree heat to roast marshmallows. But SoCal doesn’t have much lightning. If it gets hot, dry, and/or windy, you get fires.

I’d be suspicious of arson in the case of fires breaking out near Portland, but less so about fires breaking out in more remote parts of the state. In general, though, the Summer of Floyd seems to have unleashed a lot of anti-social urges, so perhaps small-town arsonists, inspired by the anarchy in Portland, are acting out on the their worse impulses during the current heatwave.

On the other hand, there is little evidence of Antifa being much driven to risk their lives by looting small towns during giant fires. They don’t really loot downtown Portland much, preferring to vandalize Starbucks rather than loot Forever 21.

So, don’t worry about looters and clear out if necessary to save your lives.