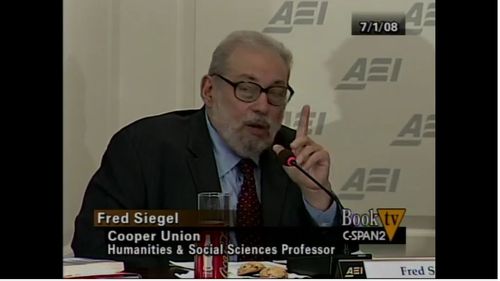 From: Chris Roberts [Email him]

On May 11, 2013, Peter Brimelow wrote a great essay called, "'This Isn’t A Free Country': The Heritage Foundation And The Fate Of Jason Richwine".

I do recommend it, but it reiterates a falsehood from Dave Weigel's article for Slate about the same issue: "Why Wasn’t the Heritage Foundation’s Jason Richwine Smart Enough to Listen to His Friends?"

Therein Weigel wrote of a panel Jason Richwine was on to discuss Mark Krikorian's then-new book The New Case Against Immigration, where Richwine spoke very frankly about race and IQ. But Weigel incorrectly wrote:

Even Richwine added some caveats. “I point out that Ayaan Hirsi Ali was given an IQ test in the Netherlands and did very poorly,” he said. “[It’s] hard to imagine someone brighter.”

But Richwine did not say that. Fellow panellist Fred Siegel did. See for yourself by going to the 49:30 mark of C-SPAN's recording of the event.[July 3, 2008]

Weigel's piece was never corrected, which is a shame, as Weigel is generally an able and honest journalist.

For the record, Fred Siegel, though generally bright, was (is?) wrong about this. It is quite easy to imagine someone brighter than Ayaan Hirsi Ali—indeed, Siegel himself is clearly brighter. Ali is famous simply she is a non-white woman who will reiterate neocon talking points about Islam, not because she is bright. What is something insightful she said that has not been said by other, less organically politically correct, critics of Islam?