An Reader Remembers A 2005 Murder By An Illegal Alien Who Worked In CO Gov. Hickenlooper's Restaurant

An Anonymous Reader [Email her] 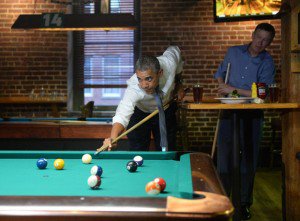 Did anyone else note the (tragic) irony of Obama's recent photo, as he played pool and drank with Colorado's Gov. John Hickenlooper?  [Beer and billiards trump a visit to the border for Obama during trip out West, By Ben Wolfgang, The Washington Times, July 9, 2014]

Denver Sanctuary Policy Protects Illegal Cop-Killer—Who Also (Get This!) Worked For Mayor, May 15, 2005

At 1 a.m. on May 8, Mother's Day, Denver Police Detective Donald Young was assassinated with a point blank shot to the back of his head. A bullet proof vest saved the life of his partner, who was shot in the back.

Raul Garcia-Gomez, the suspect, a 19-year old illegal alien from Mexico, then went home to his three-week-old anchor baby and reportedly confessed his crime to his girlfriend. Next day, his girlfriend told the Rocky Mountain News, he rose early, packed his things, and went to his job as a dishwasher for a restaurant owned by—Denver Mayor John Hickenlooper. Then he fled.[More]

Hickenlooper loves sanctuary cities and illegal aliens, and employed them and probably still does. No wonder these guys are happily fiddling with pool sticks while the border burns....truly partners in crime.

As today's Drudge Report covers the letter to Obama written by the mother of a cop killed by an illegal [Mother Of Cop Killed By Illegal Writes To President Asking Why He Wasn't Deported...] I think of the long line of dead Americans killed because of "leaders" like Obama and Hickenlooper.