An Illinois Reader Forwards A Photograph From America's "Racist" Past 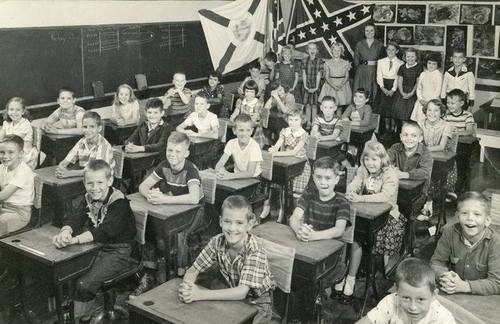 Tallahassee, Florida classroom, 1957—the Florida State Flag and the Confederate Flag in one corner of the classroom.

This picture that I've attached shows a group of kids in Tallahassee Florida in 1957, they seem happy, adjusted, and they're all white. I think this is what the Republican Party seems to always miss, everything isn't about limited government or tax cuts, or some arcane idea about how the economy is supposed to work. This is about group identity.

I'm sure these kids were taught the Confederate Cause was a good and just one. I would also believe they not only saw themselves as Southerners (and Americans) but also as part of a greater group of Anglo-Saxon people. And this was something to be proud of.

James Fulford writes: It may be worth mentioning that the class is all white because in 1957, Florida had segregated schools. (Across town there would be another school with fewer Confederate flags, and more pictures of Booker T. Washington.) In 1995, a Florida school principal suspended a young white student for possession of a Confederate flag four inches wide. The reason? The principal claimed there was reasonable fear of disruption, up to and including a riot. In the intervening years, the Supreme Court had desegregated Florida schools.