An Engineering Student Notes Democrats Push Diversity On Industry, But Don't Practice It Themselves

Re: Steve Sailer's recent article "The Progressive Crack-Up, Silicon Valley Edition: “Unless Someone Wants To Posit That Intelligence Is Not Evenly Distributed…”:

From: An Anonymous Engineering Student [Email him]

This is an excellent article that nails perfectly the Democratic Party's hypocrisy of having virtually all white (or white enough) people in high-paid major leadership roles, while forcing private companies to wear the diversity ankle bracelet.

The hypocrisy extends not only to the Democratic Party's fundraising wing in Hollywood and Silicon Valley, but also to their propaganda machine as well. Have a look at the faces of SKDKnickerbocker, a Democratic PR—”strategic communication”—company. 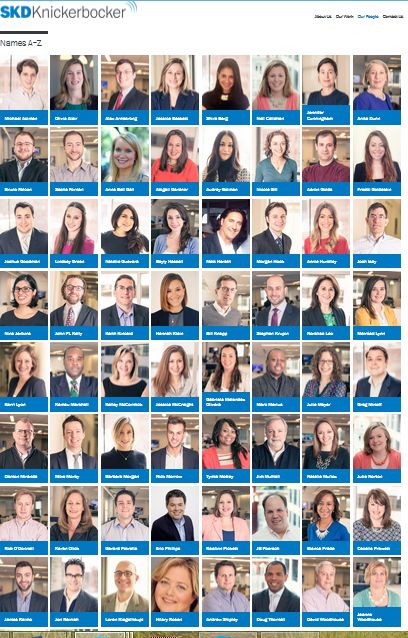 We might as well be looking at the staff of Google. Virtually the entire brass is composed of elite-educated, wealthy, healthy, white people. I counted a grand total of five blacks and three probably-Hispanics (the Hispanics on this page are of the George Zimmerman “white Hispanic” genus—just a lot richer).

We live in odd times. Major heavy industries must hamstring themselves with low-quality diversity hires or face crippling lawsuits and fines. But a Democratic Party propaganda firm is allowed to hire its employees for maximum efficiency and productive output.