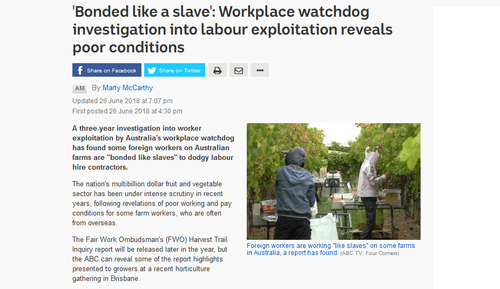 Ever wondered why immigrant labor is so essential for crop harvesting?  Could it be that it is the only way to stop crops rotting in the field because it’s a job Australians won’t do (as in these two Australian Broadcasting Corporation stories  Where are the backpackers? Plenty of fruit, but no one to pick it ; OPINION: The benefits of having Pacific Islanders pick our fruit )?  Or could it be because foreign labor is cheap and thus highly profitable?

The interim findings of an investigation by the Australian Government’s Fair Work Ombudsman (FWO) into fruit and vegetable picking in Australia’s horticultural industry gives the game away. ['Bonded like a slave': Workplace watchdog investigation into labor exploitation reveals poor conditions, by Marty McCarthy, June 26, 2018].

The FWO reports that around 70-80% of Australian fruit and vegetable growers rely on overseas labor (holders of working holiday visas) to help harvest their crop.  Whether sourcing foreign workers through labor hire companies, or employing them directly, many growers consistently underpay them by “hundreds, and sometimes thousands, of dollars” per picker.  By the end of harvest season, labor hire contractors who manage hundreds of employees can trouser hundreds of thousands of dollars in underpaid wages.

The downward pressure of cheap immigrant labor on wages across the whole horticultural industry is predictable.  One vegetable farmer said that it is impossible to remain wage-ethical and compete against those growers who use cheap labor.  Paying legally-mandated wages risks making the grower’s business unprofitable, so illegal wage-undercutting becomes systemic.

Employers of foreign labor for harvesting crops get away with their wage exploitation because they can.  Indentured slavery, in particular, works a treat because migrant pickers, says the FWO, are dependent for their visas on their sponsoring employers and are thus easily cajoled into being bonded to rubbish piece-rate wages (and substandard living and working conditions) for the whole picking season.

Australian workers, on the other hand, are way too bolshie to put up with being ripped off at work.  The only thing rotten in the crop-picking industry is the cheap immigrant labor business model.

Phil Shannon is a veteran Australian socialist and Vdare.com supporter