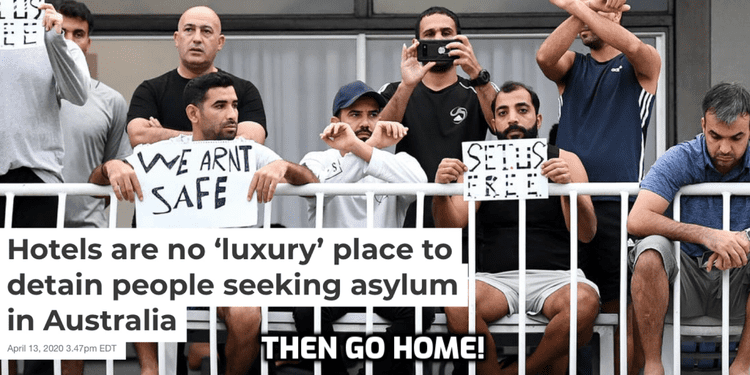 “What, only four stars!  Don’t you know who we are?”  That is probably what some “refugees” with an oversize sense of woke entitlement are thinking about the “inhuman” conditions they have to endure as asylum-seekers held in hotel detention in Australia.

A reliably woke article [Hotels are no luxury place to detain people seeking asylum in Australia, May 13, 2020] in the refugee-revering, academic public outreach website, The Conversation, argues that of the 1,436 asylum-seekers in detention on mainland Australia, the 158 who are being held in Brisbane and Melbourne hotels are enduring “inappropriate conditions” with “untold impacts on physical and mental health”.

The treatment by DIBP, now Home Affairs, of people seeking asylum in Australia, has over years been incompetent, punitive, venal & totally inhumane. COVID will not save Morrison & Dutton will be remembered only for this. Poor fellow, my country! 😢😢https://t.co/9pEDnzAepG

These hotel guests are those who had, in the grand Australian tradition of “chucking a sickie” (i.e., taking a day off work by feigning illness), wormed their way from offshore island detention (in Papua New Guinea and Nauru) to the Australian mainland under the pretext of needing medical attention.

Whilst the people’s media have portrayed hotel detention as luxury accommodation at taxpayers’ expense, such as the 45 asylum seekers in the four-star Kangaroo Point Central hotel in Brisbane who are costing Australian taxpayers more than $410,000 a week, The Conversation and other woke media beg to differ—the “hellish” conditions apparently include being held two or more to a room, guarded by security officers, with “limited” access to exercise facilities.  Thanks to COVID-19, the “refugees” are now part of the woke movement to “decarcerate” criminals and illegals in prisons and detention centers.

How interesting that one man’s “hardship” is another man’s fully-serviced hotel room, with cable TV, Internet, room cleaning, fresh sheets and towels, and free laundry, meals, electricity, gas, water, air-con and gym access (which would cost regular Australians and legitimate travelers well over $200 per day).

The whiny complaints by the uniformly fit and healthy-looking young males (pictured) about their new life could make one wonder whether their claim to face persecution, torture or death in their homelands holds any water at all, and whether their claim to need medical treatment in Australia is also a transparent ruse to cheat and fib their way to a lifestyle upgrade by taking Australian workers' jobs and taxpayers' welfare.