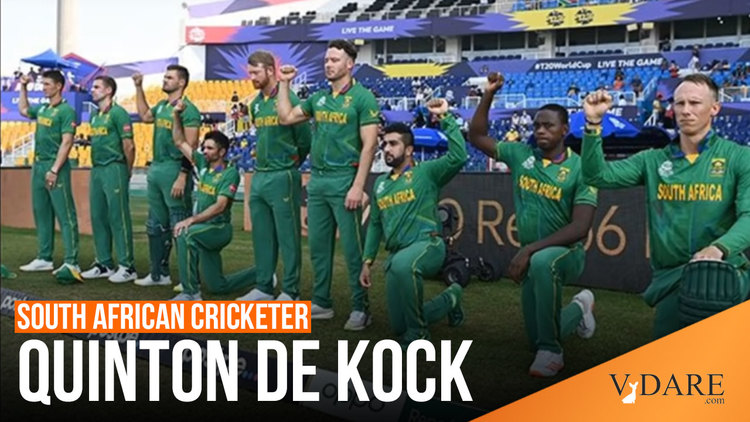 Earlier: An Australian Reader Reports The Australian Cricket Team Did NOT Bend The Knee To Black Lives Matter

The bureaucrats who run South African cricket had ordered all the players to “take the knee” against the West Indies after they had, in their opening game against Australia, adopted a variety of gestures against “racism” in cricket, whether that be taking the knee, or raising the fist, or standing to attention, but some, including fast bowler Anrich Nortje and batsman Heinrich Klaasen, white Boers both, had casually stood with their hands lowered, signalling either their displeasure with, or indifference to, the political theatre.

Apparently, however, some things are too diverse for the Great God Diversity, and the de facto snubs to anti-racist groupthink by the white guys were too much for the racially-correct cricket bosses who subsequently made a snap order for uniform knee-taking at the next match.

De Kock was having none of it and withdrew from the game against the West Indies, preempting his certain sacking.  De Kock is from, as the BBC coyly puts it, a “dual heritage family” (his stepmother is black) and the white part of his divided loyalties has seen him refuse to take the knee in the past [Quinton de Kock: South Africa keeper sorry over refusal to take a knee and says he is not racist, October 28, 2021].

It was speculated that De Kock’s decision to withdraw from the game involving coerced knee-taking may mean that he never plays for South Africa again, but his defiance lasted all of two days.  He has since apologized, reaching deep into the clichéd grab-bag of the repentant: "I am deeply sorry for all the hurt, confusion and anger that I have caused”; "I did not, in any way, mean to disrespect anyone by not playing against West Indies, especially the West Indian team themselves"; “If me taking a knee helps to educate others, and makes the lives of others better, I am more than happy to do so"; “For me, black lives have mattered since I was born.”

“Being called a racist because of a misunderstanding hurts me deeply … It hurts my family. It hurts my pregnant wife.”  Powerful word “racist”—getting called one is a fate worse than death.