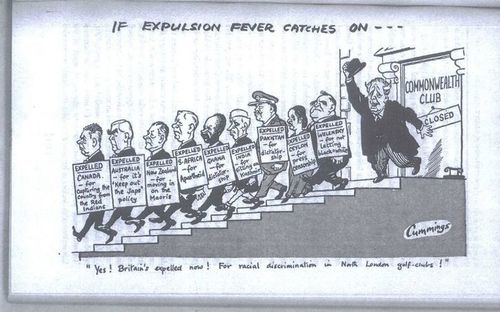 A Reader In Australia [Email him]

I had totally forgotten this page from Volume One of Australian Prime Minister Sir Robert Menzies' memoirs, into which I dipped afresh today. It's a 1961 cartoon from, I believe, Britain's DAILY EXPRESS by a certain Michael Cummings. 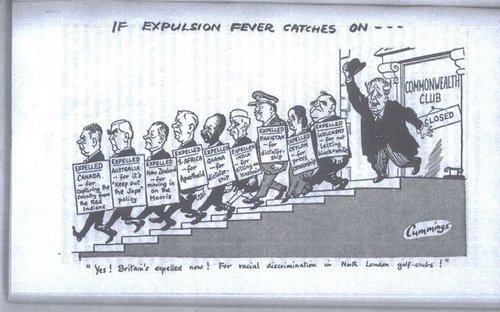 Haven't found the exact date of its appearance. But it must have happened just after PM Hendrik Verwoerd had withdrawn South Africa from the British Commonwealth. (March 1961).

Anyway, if anything like this cartoon were published in Cool Britannia, it would be banned, I should imagine, as "hate speech". A little pleasant browsing through Whittaker's Almanac annuals—at the State Library of Victoria—identifies all the figures portrayed. From left to right:

James Fulford writes: Hendrik Verwoerd went to London in 1961 to say that South Africa wanted to be a republic, not a monarchy, and asking (or offering) to remain in the British Commonwealth. All the black-ruled countries, which had been granted their independence on a similar basis, objected to this, because a white-ruled democratic country was much awfuller than all the black-ruled “One man, one vote, once” countries.

So Verwoerd withdrew his country’s application for membership of the British Commonwealth "in the interests of South Africa's honor and dignity".

It was the start of the denormalization process that led to black rule.

The cartoonist's point is that there was no Commonwealth country that couldn’t be attacked by anti-racists. And since 1961, all the white-ruled countries above have suffered similar attacks on their culture and history.