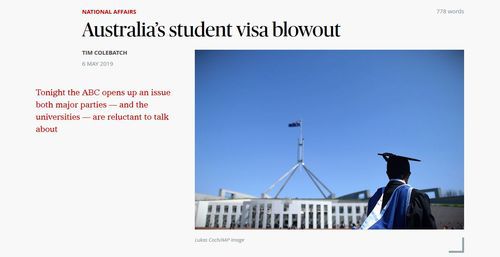 Re: John Derbyshire’s May 3 Radio Derb comment on the Opportunity Costs of foreign students

Thanks, yet again, to John Derbyshire for saying what ought to be said about the glut of foreign students in the West’s universities: “stop issuing visas to foreign students. Those full-tuition foreigners are great for the colleges' balance sheets, but they take up classroom seats Americans should be sitting in”.

As well as these language difficulties compromising academic outcomes, there is a general lowering of standards for academic ability for foreign students.  International students at Australian universities consistently fail a higher proportion of their subjects [Are international students passing university courses at the same rate as domestic students?, The Conversation, May 7, 2019] to which the recourse is cheating by students and ‘soft marking’ by academics.

Whilst international students comprise 15% of the total student body in Australia, a  major student survey found that foreign students were twice as likely to cheat, with 33% of all students who admitted to cheating being foreign ones. [VDARE.com note: See  Chinese Cheating Ring: "An Industry Devoted to Helping International Students Scam Grades" and China's Long "Traditions Of Scholarship" Backed By JUST AS LONG Traditions Of Cheating.]

A survey of academic staff, also found that more than two-thirds of university teachers suspect that work submitted by foreign students was plagiarised because the faultless English in the submitted work was incompatible with what those academics knew of the English-language ability of their foreign students.

Not that university academics can do much about it—a teachers' union survey found that 28% of academics agreed with the proposition: “I feel pressure to pass full-fee paying students whose work is not good enough”. [Australia’s student visa blowout,  by  Tim Colebatch, Inside Story,  May 6,  2019]

The only people untroubled by all this are the foreign students, for whom moving from a student visa to permanent residency of Australia is often their real goal.