An American Veteran Reports That The Vatican's Walls Are Guarded By Armed Soldiers—Unlike The US Border!

From: "Old Soldier" [Send him mail]

Attached are three photos my wife and I took at Vatican City in Rome in June, 2015.

One photo  shows some more of the Vatican Walls, although not as dramatically as the one Mr Fulford ran.

The other two photos are of Italian Army troops deployed at the base of the Vatican City walls on the "Italian" side in Rome. 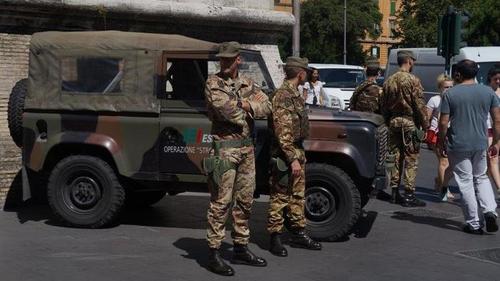 To my professional eye it appeared an infantry company minus was on duty around the Vatican City perimeter.  I expect the remainder of this unit's parent infantry battalion was located nearby and ready to reinforce at short notice. 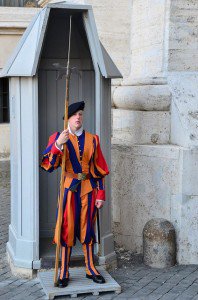 Inside Vatican City we only saw two Swiss Guards in their traditional ceremonial uniforms.  These were at a portico under St Peters.  The rest of the Swiss Guards were in their simple duty blue uniforms.  All of them were packing pistols.  Plenty of armed Vatican City police were visible, too.

Whatever public hypocrisy Francis and his minions indulge themselves with about immigrants, walls and border guards, he and his hierarchy clearly regard themselves as being under constant direct threat of lethal violence originating from "migrant" people who are alien to the Vatican City state.