Re: An American Veteran Reports That The Vatican’s Walls Are Guarded By Armed Soldiers–Unlike The US Border!

From: "Old Soldier" [Send him mail] 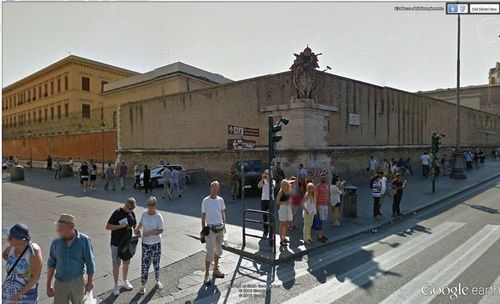 This Google Street view dated 9/2015 actually shows reinforcement of the same corner of the Vatican Walls I wrote you about the other day. The soldier on the right is carrying an assault rifle. In addition, a police car is now deployed at the same spot. "Traveling" around the perimeter using Google Street View reveals additional military trucks and troops parked at regular intervals.

This is in addition to abundant Italian police. The driveway entrance gateways have checkpoints manned by the blue uniformed and armed Swiss Guards as previously mentioned.

We had initially passed these mobile guard posts on our way into St. Peter's Square and Cathedral from the Rome metro subway station. The previous duty shift were also carrying assault rifles. I decided we should snap a few pics on the way out for posterity's sake.

I see a Jesuit priest named James Martin has been active on Twitter. He has been mendaciously claiming that Vatican City is "open" based on the geometry of St Peter's Square.

He posted his tourist picture as an attempted proof that the Vatican is open to an influx of illegal aliens to enter and settle.

To all those tweeting photos to me of the Vatican walls that supposedly keep people out, a photo I took. Drop by! pic.twitter.com/Icc3TjwOlM

This is a half-truth that creates a lie. St Peter's Square is only "open" up to the entrance into St Peter's Basilica, which is rightly free of charge as befits a church. You cannot, however, freely proceed past St Peters Square into the rest of the Vatican City territory. The access points are all secured by the armed Swiss Guards and Vatican police I previously mentioned. The Vatican's functional wall system thus excludes St Peter's Square.

I can also add that while waiting in line to enter St Peter's Basilica I made sure to keep one of the columns seen on the left side between my wife, our teen son and myself and the mass of the people who would obviously be the target of any suicide bomber.

My congratulations to James Martin, anyway. In my opinion he has gone far to perpetuating for another generation the reputation of the Jesuit order as mainly being a nest of politicized and deceiving snakes.

All visitors to the Vatican are under the lidless eye of innumerable armed guardians both open and hidden. And they all have to leave each evening. As we overheard a tour guide explain, no one is born in Vatican City and only the Pope is allowed to die there. This ban on child birth is somewhat astounding considering Francis' recent complaint to Angela Merkel of Europe being incapable of bringing forth children.

But overall I highly approve of the immigration policies Francis presides over in actual practice. No illegal immigrants are tolerated for a single second, there are no "church" or "city" sanctuaries excepted for them to squat in, no visitors are allowed to become economic burdens on the State and a high level of physical security is provided for all the legal residents. In all this Francis provides a physical example that I'm sure all the friends of VDARE.com want the USA to emulate, except for the ban on children.