Re: James Fulford's article “Not Reporting Race”—MSM Promoting False Consciousness About Race And Crime, With Help From Cathy Young

I just got done watching Charlie Rose interview NBC journalist Richard Engel plug an intriguing story that he has just broken and that will air soon on the NBC show DateLine. [May 13, 2016 ]

Apparently he got dossiers of 15 "Americans" (many of them related) who have joined ISIS and somehow much of it has eluded the FBI's attention.

It was so aggravating watching Charlie Rose interview him because he refused to ask the obvious questions; "Are they immigrants?  Are they Muslims?  If they are immigrants, when did they immigrate?  What ethnicity are they?"

From all the questions Rose asked over the course of 20 minutes, I still couldn't tell if this was some bizarre American family with no connection to the Muslim world that just up and decided to join ISIS or far more likely, an immigrant family who like a domesticated wolf, hears the call of the wild and decides to return to its pack and its natural ways.  And some of his questions are boneheaded if in fact these "Americans" are in fact immigrants.  Like he wanted to wrap his mind around how they are 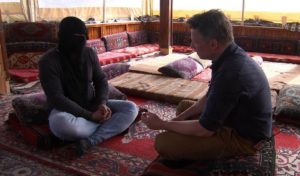 recruited and what could possibly attract them to this.

I had to Google: "Richard Engel NBC ISIS American family”. Only then could I begin to piece it together.(Right, Engel interviews a guy named Abu Mohammed in Turkey about these "Americans".) But even then, there was nothing directly answering the questions I posed in the third sentence of this letter.