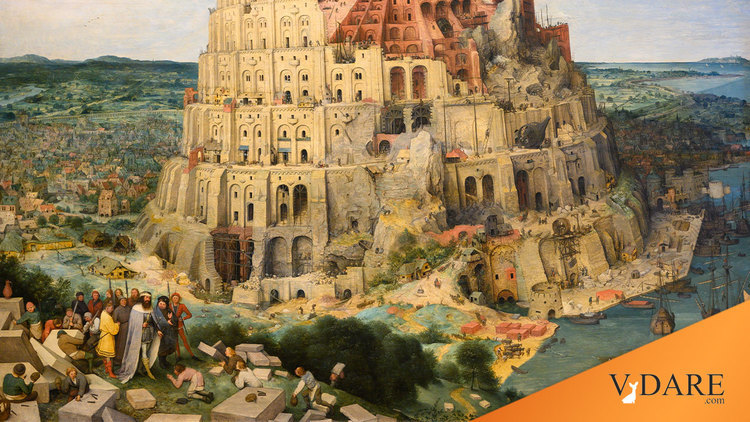 Re:  A Reader In Florida Tries To Guilt VDARE.com With Theology

Regarding Vdare.com's latest letter on Biblical cases concerning immigration; I have my own, in Genesis it describes a situation where all the people of the earth assembled in one place and endeavored to build a giant tower to house them all in one place speaking the same language.  (Genesis 11:5-8). For whatever reason God did not like this plan and made them all speak different languages and scattered them across the globe.

Here we see that God doesn't want us all to assembled in one geo-political polity (America) he wants us scattered across the globe each with our own discrete tongues, folkways and territories.

God is against the multiculturalists' grand scheme of creating a giant Tower Of Babel in the United States.  He wants mankind separate and apart from one another to create TRUE diversity on earth and given that a third of mankind wants to live the U.S., restricted immigration is the only way to accomplish God's will.  So you see, multiculturalism and the unrestricted immigration on which it depends is an affront to God.

Ryan Kennedy (email him) has written us many letters and articles.He lives in Anchorage, Alaska.

James Fulford writes: I won't challenge the theology, one of the many things VDARE.com is neutral on, I just thought that Bruegel's Tower Of Babel, above, would be a good follow-up to the pictures in the previous letter.