A West Texas Reader Wants Know Why The Corps Of Engineers Can Protect New Orleans With A Wall, But Not America

Regarding money and wall-building, please see the pic below, which I found floating around on the web. 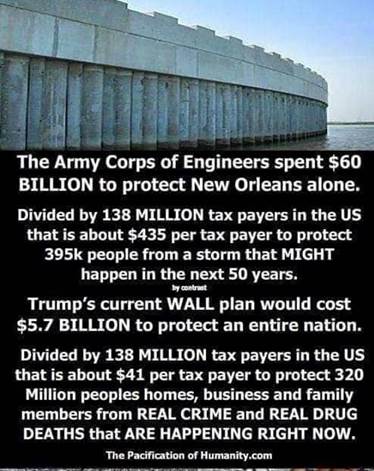 I think the numbers need correction but the general comparative costs/benefits for public-works is valid. This reference to huge expensive structures to protect New Orleans (post-Katrina) was news to me.

Apparently, the NOLA hurricane defense wall on one strategic coastal lake, built by the Army Corp of Engineers direct cost was $14.5 billion. Probably more, when all related expenditures are added up. Maybe $60 billion all-in for the system.[With huge bill due to Army Corps of Engineers, Louisiana to ask feds to forgive debt for new levees, by Bob Marshall, theadvocate.com, July 31, 2016]

Below, the Flood Authority provides evidence that the Government is capable of building a big, beautiful, wall:

This is offered as one more discussion point in favor of The Wall.

Of course, we know facts and logic do not apply to this topic. It all boils down to what we already know:

Another Katrina-like hurricane, or worse, is out there, and for New Orleans the big questions are: How soon before the next one hits? How prepared will the city be?