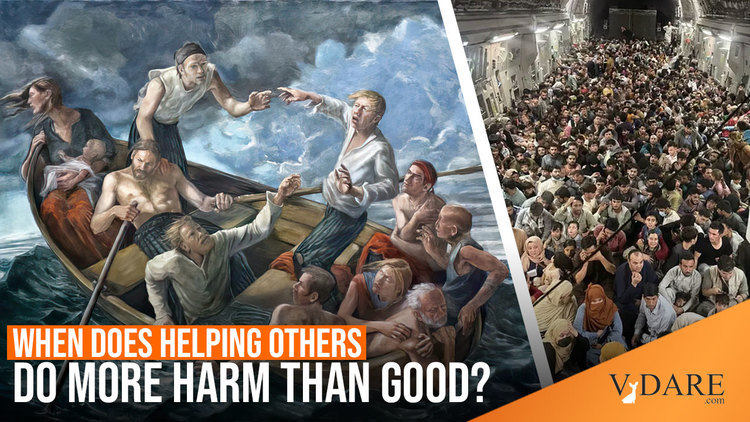 A short memorable phrase can help get a point across: "America First," "Build the Wall," etc.

Steve Sailer brilliantly gave us THE concise phrase to diagnose and label the disastrous policies of Uniparty/Globalists: "invade the world/invite the world/in hock to the world."

And Steve writes of this issue in the context of  the indigenous central Italians who built Rome , in contrast to those imports who were part of the downfall.

Borrowing from that, and from the brilliant John Derbyshire discussing importing  the world's problems, let me respectfully and humbly suggest a fourth phrase for consideration. This phrase refers to activity that has been occurring all along; it is just that the appalling surrender of Afghanistan and subsequent jetliners packed with countless random-nobody-knows-who-they-are dumped into America, exposed more vividly the nefarious activity described by this fourth phrase.

My respectful, humble suggestion (if not too long, unwieldy)—consider expanding Steve's phrase to become "invade the world—invite the world—in hock to the world—import the world."

Not content to be merely passively leaving the border open to illegal aliens, now Treason Lobby thugs actively import whatever random-mass-groups of people they can scoop up wherever. Jam those jumbo jets full of haphazard-whoevers and hastily discard them in unsuspecting American towns.

Granted, this active importing has occurred for years as in the so-called "refugee" programs, "visa lottery," etc., but it’s now on a massive scale.