Re: James Fulford’s article: Rubio, Republicans, “Our New Spanish-Speaking Overlords,” And How To Fight Creeping Bilingualism

From: A Virginia Reader [Email him]

James Fulford writes “Canada has a lot of experience with bilingualism, all of it bad."

I really beg to differ.

The effective requirement on all Canadian children to learn both English and French results in the native tongues of Canadian immigrants—Chinese, Spanish, Hindi, or Arabic or whatever—being significantly weakened, as it becomes their third language instead of just their second (as it would be in the United States). That, in turn, feeds assimilation—when kids can no longer read the Arabic or Chinese websites, they start reading the local English and French ones instead.

Immigrants to America would also assimilate much faster if they were required to know two languages, instead of just the very common English that almost everybody around the world learns anyway.

Also, the strict need to have everything bilingual in Canada effectively blocks out Spanish getting a foothold (going trilingual will be next to impossible). This reduces immigration from Spanish-speaking countries, in particular those immigrating just for government handouts.

Immigrants from Mexico realize that almost everything is translated into Spanish in the United States but not in Canada (nor will it ever be due to the presence of French occupying the #2 slot). So they just come to the United States instead.

Thus French has a very beneficial effect to Canada in that it reduces Third World immigration, as well as ensuring that the immigrants that do come realize their kids will have to learn two languages and as a result their native tongues will weaken. Those immigrants who don't want their kids to assimilate in such a manner go to the United States instead.

If you could wave a magic wand and get rid of French in Canada, all that would happen is that Spanish would take its place very rapidly (just as it did the United States) and, with it, massive legal and illegal immigration from the Spanish-speaking countries. Immigrant children would go back to learning just English and their native tongues (the latter, very fluently). Assimilation would drop.

Canadians are smart in keeping French in the #2 slot.

James Fulford writes: The reader makes some interesting points, but this does not seem to be how it plays out on the ground in Canada.

There’s more, but that gives you the idea.

As for trilingualism, that’s not impossible, it’s already happening in America—the sign below is not from a Canadian website, but from an unemployment office in Glendale, California. The Klingon-like third language turns out to be Armenian. 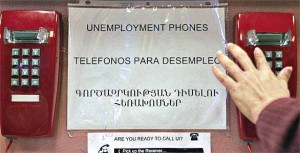 No, the best choice is to have one official language, and the US, that means English.