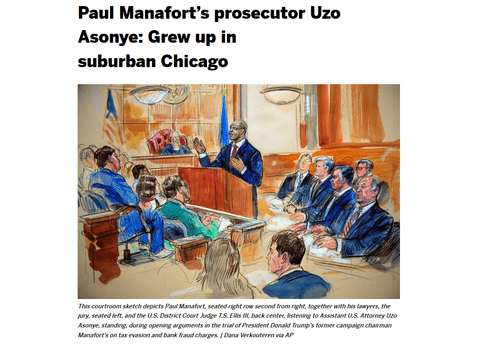 The US Attorney Mueller has going after Manafort is an Affirmative Action hire:

After the jury left, Ellis took a few minutes to tell the press and public all about the bench conference. As it turns out, not only was Ayliff a non-noticed witness being asked to give the equivalent of expert testimony, but the prosecution and defense had already agreed on what the term “financial interest” meant. Moreover, this agreement was provided on a proposed–and approved–jury instruction.

That is, not only was Ayliff not an expert and not a noticed expert as necessitated by the Federal Rules of Evidence–but his testimony had the potential to derail an already-agreed-upon definition of the term(s) in question. This, Ellis said, could have “confused or clouded” things for the jury.

This business of Manafort’s accountant not being a  noticed  expert was “noticed” by the Judge, but not by defense counsel, who failed to object.

James Fulford writes: Uzo Asonye, pictured right in 2008, was the subject of a "30 Under 30" roundup of Washington lawyers, which  described him like this:

Uzo has carved a real niche for himself in O'Melveny's Congressional investigations practice, led by firm Chair and former Reagan White House counsel A.B. Culvahouse. Sen. Majority Leader Bill Frist, Sen. Pete Domenici, Harvard University, and Mass General Hospital have all benefited from his behind the scenes work during Hill inquires. Potomac fever bit him while still in law school; after field organizing for John Kerry's '04 campaign in Broward County, Uzo made a beeline for DC to work for Jesse Jackson Jr. instead of returning to New Haven for his third year. Good thing Yale lets you take finals online.[Emphasis in original.]

That makes it look more like a political prosecution than usual. Congressman Jesse Jackson Jr., by the way, is now an ex-convict.