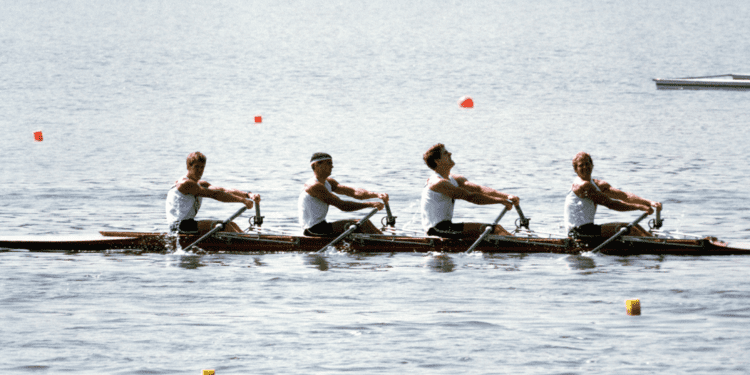 As a former Olympic oarsman, the first time I came across Steve Sailer's writing was when I read "Track & Battlefield," which he co-wrote a number of years ago with Professor Steve Seiler.  Since then, I've become somewhat of a VDARE.COM junkie, and all kissing-up aside, he is my favorite VDARE.COM contributor.

I retired from competition after the 1988 Olympics. But I was vaguely aware that they've tightened things up quite a bit since I quit racing, and that nowadays, just because you make your national team, it's no longer a guarantee that you'll be competing in the Olympics.  Even back in the eighties, the International Olympic Committee [IOC] was rattling its sabre, making FISA , [Fédération Internationale des Sociétés d'Aviron, the international governing body of rowing]. Understand that it wasn't happy, given that rowing garnered the second highest medal count at the Olympics, right behind track and field.

I sort of counted my blessings, realizing that in today's game, my boat, the American quadruple sculls, likely would not have been given the nod to compete in the Games.

But it wasn't until just a few days ago, when I came across an article in Rowing News, that I began to see red.  The behind-the-scenes deal making goes like this:  FISA, in an effort to assuage the IOC, is on a PR mission to make rowing, a very European (ahem: white) sport, appear more widely embraced on the world stage than it is.  Hence the Asian, African, and Latin American "Continental Qualifying Regattas," wherein sixteen out of the allotted thirty slots for the men's single scull are awarded to second—or, more often than not—third-rate scullers. [Underdeveloped: Globalizing the Games, September, 2004, "The Growth is impressive, even if the rowing isn't"]

How did we ever come to this? Should we thank the Jamaican bobsledders, a ski jumper named Eddie "the Eagle" Edwards, or, more recently,

Eric Moussambani of Equatorial Guinea, who, four years ago, competed (I'm being generous here) in the hundred-meter freestyle?

Remember it? Moussambani's only competitors in the opening heat had both been disqualified for false starts, leaving Moussambani to race alone, against the clock. At Sydney's sold-out natatorium, the crowd first scratched its head at the sight of a swimmer who could barely swim, next laughed out loud when a bona fide Olympian began doing the doggy-paddle, and then held its breath, wondering whether or not this newcomer would finish the race or drown.

But finish he did—more than a minute behind the heat winners—and no one seemed to mind. The crowd was on its feet, cheering wildly for a different sort of Olympic hero, a David, if you will, who had the guts to face the giants of the sport, all in front of a worldwide audience.

At that moment, I'd wager that millions upon millions of people around the world were wiping their eyes. I know—I was one of them.

But while Mr. Moussambani's personal triumph ought not to be dismissed, the question begs to be asked: What was a man who could barely swim doing at the Olympics, going up against the world's best, when literally a billion people from around the world would likely have bested him in the event?

Many a time it's been said that making it to the Olympics isn't just about winning—it's about the getting there. But in this, the twenty-eighth modern Olympiad, just exactly where is it that we've arrived? Is it okay with everyone that a Russian or American man—both of whom might have been two or three lengths back, in fifteenth or sixteenth place, say—will be sitting at home, watching TV, as a man from Tunisia flounders about in his shell, some twenty lengths behind, placing twenty-seventh out of thirty in a watered-down field?

Me, I got no problem with the whole thing, about manufacturing Kodak moments to help promote "the human element inherent in sport."

As long as, that is, they reserve lane one in the 100-meter track finals for George Costanza from Seinfeld.

And while we're at it, we probably ought to reserve lane eight for William Hung of American Idol fame. Doubt if the dude can run, but man—oh, man—he definitely bangs.

Steve Sailer comments: It's worth amplifying the reader's point: the competitive threat to the current Olympic sports does not come out of the burgeoning Third World, but from suburbia.

Human beings have always made up games, but in the history of organized sports there have been two golden ages of creativity and formalization:

It's not surprising that the older Victorian sports like rowing are trying to fend off the extreme sports with a PR offensive to make their participants look more diverse than they really are, by letting in participants from countries like Tunisia that barely have any rivers.

Of course, the Tunisian rower who gets admitted to the Olympics in place of a faster American or German isn't likely to be terribly diverse in a class sense. He probably got interested in rowing while attending Oxford.

Peter Brimelow adds: The Olympics are on? Again?