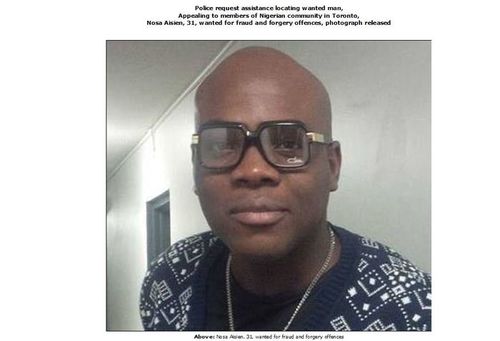 A little while ago I sent you a link to an old Doug Saunders column where he said Canada needed a million poor African immigrants. Saunders claimed Africans who moved to Spain had found work.

I wondered how this could be true given Spain's poor economy and high unemployment. I think I have stumbled on to the answer to my own questions. It seems African migrants, at least those from Nigeria, are much more ambitious and entrepreneurial than I had suspected. Here’s a news release from the Toronto police.

Toronto Police Service Financial Crimes is seeking the public's assistance, particularly from members of the Nigerian community, locating Nosa Aisien, 31. He is currently the subject of a Warrant in the First.

It is alleged that:

- in July 2014, Nosa Aisien impersonated an employee of a company to negotiate a wire transfer defrauding a financial institution of a substantial amount of monies

- Nosa Aisien used the internet to facilitate carrying out the offences

An arrest warrant has been issued for Nosa Aisien for the following:

3) Personation to gain an Advantage

4) Unauthorized Use of a Computer Service

Investigators believe Nosa Aisien may be living under an assumed name in the Toronto area and is known to frequent locations and events attended by members of the Nigerian community in Toronto.

Call me surprised. Who would have thought Africans could be such go-getters? The Toronto Star, by the way, carried a tiny article about the scam mentioned in the attached news release. It was buried at the bottom of a back page. The Star did, however, give prominence to another article about an African (Somali) immigrant:

“Congratulations!” one man yells. “Mabrouk!” cries another, echoing the sentiment in Arabic.

“Thank you,” Hussen responds, flashing his big smile and adding “shukran” without missing a beat.

From refugee to MP: Ahmed Hussen’s remarkable path to Parliament

Hussen, who arrived in Canada alone at 16, was elected Canada’s first Somali-Canadian MP on Monday.

Mr. Hussen and his Toronto constituents are part of the multicultural coalition that gave  Justin Trudeau his recent victory.