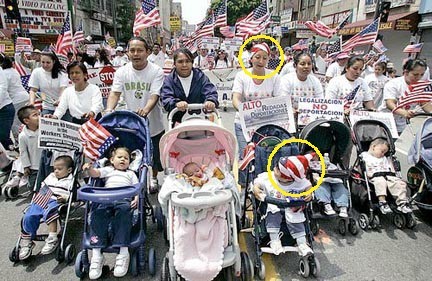 [Previous Letter: A Southern Reader Sees No Justice In A "Slavery Tax" ]

The following sections of the U.S. Flag Code have been egregiously violated by illegal alien protesters in the photo accompanying Brenda Walker's "Rasmussen Poll: Nearly Two-Thirds of Voters Object to Anchor Baby Citizenship." Pertinent sections are  §8 - d (“The flag should never be used as wearing apparel, bedding, or drapery.”) see people circled in yellow, below. Section 8 - i (“The flag should never be used for advertising purposes in any manner whatsoever, etc.”) applies to the entire remainder of flag wavers as the event is devoid of patriotic or reverential atmosphere. In an odd twist, this is worse than the 2005 protests with their abundance of foreign flags. At least there was no confusing anyone's true intentions. 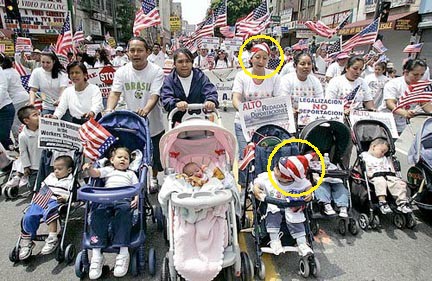 Such events are nothing more than subversive political stunts aimed at overturning U.S. law by brainwashed minions with no legitimate power on American soil. These cretins with their excuse of benign, permanent ignorance of U.S. culture and values have effectively slapped every law-abiding U.S. citizen in the face. I find such behavior reprehensible and the country's entire leadership should lash out in defense of our national symbol.

James Fulford writes: As far as the law goes, the Supreme Court has made the Flag Code and laws against flag desecration a dead letter. See Texas v. Johnson, 491 U.S. 397 (1989), and while you’re at it, see Rehnquist’s dissent.