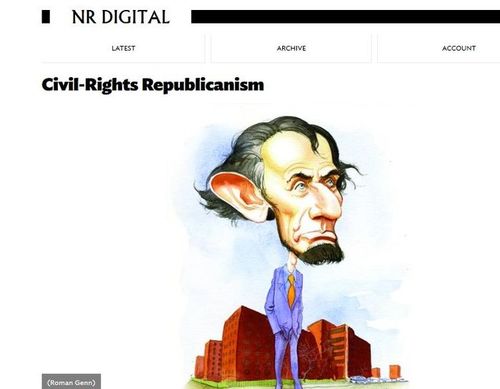 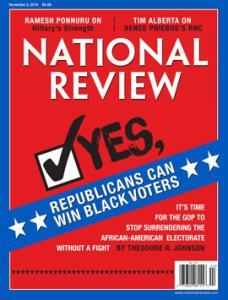 From: Ozzie Of The Ozarks [Email him]

I thought you'd be interested to know that the author of National Review's cover story this week is none other than Theodore R. Johnson [Email him] a black writer who has previously advocated giving blacks 5/3 of the vote. Very conservative.

Civil-Rights Republicanism | How the GOP can appeal to black voters - and why it should, by Theodore R. Johnson, National Review, November 2, 2015,

Here is another story of interest by him:

I’d experienced it before, but it was especially palpable one morning when I had to run around two white women out for a walk at a high school track. I felt the need to shrink—to make myself small and move past them at a distance comfortable to us all. If they perceived a threat—albeit, one clad in a Harvard shirt, “Go Navy” shorts—it could turn out rather poorly for me. So my body language, involuntarily and quite naturally, conveyed passivity. Of course, I’d done or said nothing that should have made them feel endangered, but the presence of my blackness in a space where they hadn’t expected to encounter it placed the onus on me to make them comfortable.

Heroes like Frederick Douglass and Rosa Parks feel like characters in a novel—a world away from the clicking locks and nervous glances that plague millions of ordinary people.