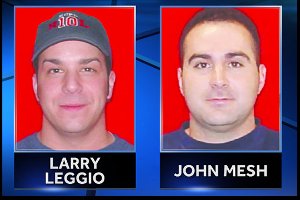 From: A Missouri Reader [Email him]

In Kansas City two weeks ago, an apartment building burned down, killing two firefighters. Today comes the news that a "Kansas City Woman" was arrested for the crime.

Her name? Thu Hong Nguyen, and she's already received cash from two previous fires. Notice there's nothing in the story about whether this "Kansas City Woman" might be an immigrant.

A Kansas City woman has been charged with starting an Oct. 12 fire that resulted in the deaths of two Kansas City firefighters.

Thu Hong Nguyen, 43, is charged with first-degree arson and two counts of murder in the deaths of Larry Leggio and John Mesh.

Leggio and Mesh died when the burning mixed-use building at Independence and Prospect avenues collapsed. Two other firefighters were injured.

According to court records, investigators from the Bureau of Alcohol, Tobacco, Firearms and Explosives determined that the fire started in the northeast corner of the LN Salon and Spa, which operated there. They said it appeared to have been deliberately set.

Investigators said Nguyen told them that she left the salon on the night of the fire, but they later determined through surveillance footage from nearby buildings that that Nguyen was the last person out of the salon at 7:12 p.m. The first signs of smoke were visible about 10 minutes later.

Nguyen also told investigators that she has received insurance proceeds from other recent fires, including one in the same building in January. A fire in Lee's Summit in 2013 damaged a nail salon where Nguyen had a work station.

According to court records, investigators said Nguyen bought four bottles of acetone and four bottles of isopropyl alcohol, both of which are ignitable, on the day of the fire. Police said she also told them about cellphone calls which did not match the records on her phone.

Nguyen was arrested Monday evening. Her bail has been set at $2 million.

James Fulford writes: Nail salons operated by Asian immigrants have been  part of the libertarian case for immigration for years. See The Nail File by Virginia Postrel, Reason, October 1997 right through to What The New York Times Gets Wrong About Cheap Nail Salons | Even if Asian nail salons are as exploitative and toxic as the Times says, the answer isn't more government oversight, by Elizabeth Nolan Brown, Reason.com, May. 8, 2015. I think even Reason would admit that an arson fire that killed two men was a violation of the Principle of Non-Aggression.