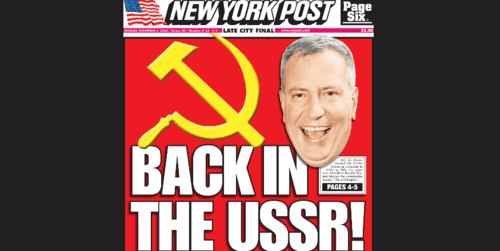 A Reader Thanks Us For Our Clarity On De Blasio

Thanks to Nicholas Stix for using the term "Communist" in reference to New York Mayor de Blasio. He could have used it in reference to the Mayor and State's Attorney of Baltimore as well.

We REALLY need to use that term more often. "Cultural Marxist" is too pseudo-intellectual wussy to be very effective.

God help Officer Slager! I wish Donald Trump would step in to help him! But that's probably asking for too much.

James Fulford writes: De Blasio has a long history with actual Communism (see De Blasio Worked for Sandinistas, Honeymooned in Cuba By Melanie Batley, Newsmax.com, September 23, 2013) whereas the Baltimore officials  mentioned (Stephanie Rawlings-Blake and Marilyn Mosby) are black  politicians more interested in solidarity with other blacks than with Marxist-Leninist theory.