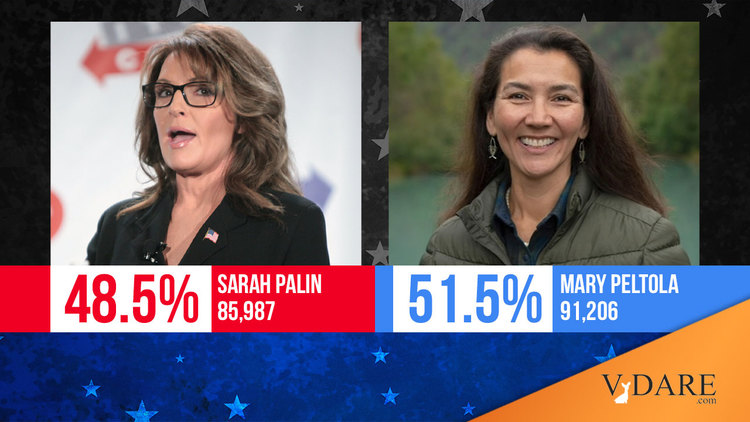 Democrat Mary Peltola won the special election to fill the U.S. house seat that was vacated after long-time Congressman Don Young passed away. She beat Sarah Palin. Peltola had 51% of the vote and Palin had 49%.

Alaska has this weird new ranked choice voting scheme where you get to vote for your second choice. There were two Republicans and one Democrat running.

Needless to say there was no mention of immigration during the race. I got tons of mail and none of it had anything about immigration. I got a lot of stuff about Peltola helping to cause inflation and Biden, but nothing about how she is in favor of critical race theory and the whole anti-white agenda.

All is not lost: this election was only to decide who completes the four months remaining in the vacated House term. There is still the general election in November to see who is the at-large Congressperson for Alaska. But it does give Peltola tons of coverage and national exposure. She’s an Alaska Native and the media is beside themselves with joy about it.

What I want to know is when the Republicans will take the bull by the horns and attack Democrats on the issue that voters repeatedly poll as their biggest concern: immigration.