A Reader Reports NY Pols Want To Ban Use Of Hate Speech As Evidence In Criminal Cases—As Long As The Hate Speech Is Rap Lyrics!

From: Ward Hanover [Email him]

I saw this headline and it struck me as one of those funny stories you guys would run. Democrats, who want to increase Big Tech censorship and expand Hate Crime laws to include even mild discussions about immigration or crime statistics, are looking to exclude "rap lyrics" from ever being used in a criminal prosecution—as they have been, either as "true threats" where a drug criminal threatened arresting officers by name, or as evidence of malign intent in a murder trial .

Eleven-year-old Marquan dreams of becoming a rapper. But right now, the future of creative freedom for artists like Marquan awaits a crucial decision.

Will song lyrics continue to be allowed as evidence in criminal cases?

Marquan and other young rappers like Dauda Mohamed Kanneh, who work with Lyricism 101 through the Boys & Girls Clubs of Albany, have found writing lyrics is a fun and healthy way to handle feelings.

“It’s a way of expressing myself, my life and what I’ve been through, and everything around me. Some things are good, some things are bad, but nevertheless, they’re my ideas,” said Kanneh.

In the battle for creative expression, rap is the main focus, but the discussion is happening among musicians in all genres.

Singer and guitarist Matt Malone has been creating music for nearly two decades.

"There should be no rules when it comes to any kind of art,” said Malone. “It’s kind of scary to think about sometimes.”

Before he nails down the notes and crafts the chords, before he even picks up his guitar, he begins by taking pen to paper.

“As far as the way I write lyrics, it's kind of just letting go of all inhibitions and letting it all run out of me, and if somebody were going to say, 'you cant write about that,' and stifle that process ... it could be pretty critical,” said Malone.

Creativity turned criminal in 2018 for Rochester rapper Randy Ross, who was arrested for his lyrics about a school shooter. Charges were later dropped, but Ross lost his job and spent time in jail.

Hoylman and Senator Jamaal Bailey [Right, not a white Democrat] 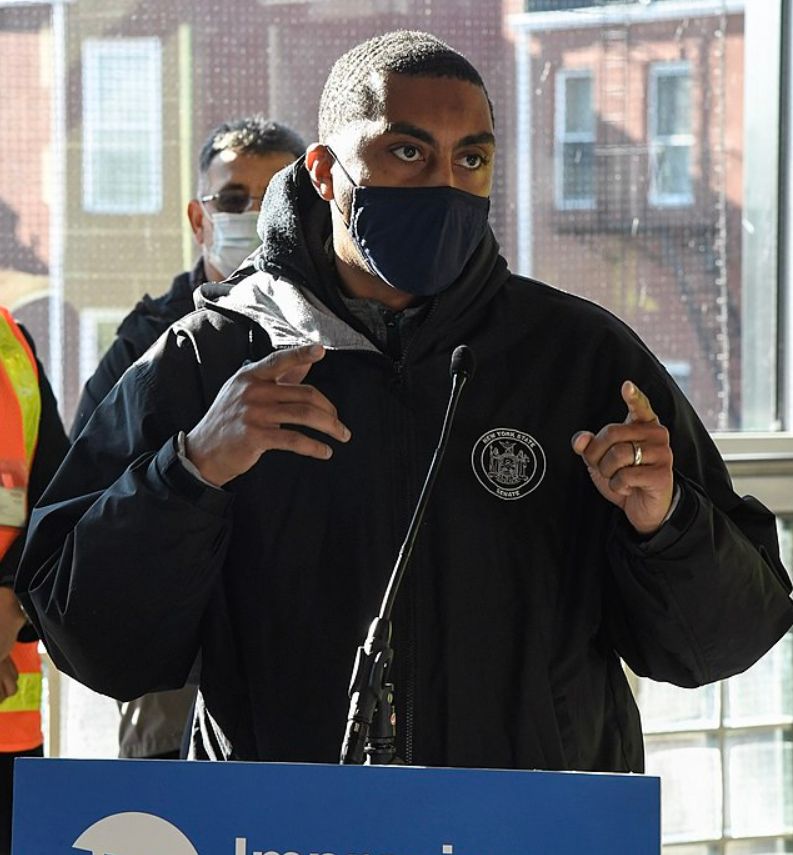 said they hope to prevent bias with new legislation “Rap Music on Trial.” Prosecutors would not be able to use an artist's lyrics against them in court without clear and convincing proof there is a literal, factual nexus between the lyrics and facts of the case.

“There’s no New York without art, whether it’s provoking or inspiring or whether its beautiful or crude, or in some cases disturbing,” said Hoylman.

For Kanneh, his immediate sights are set on a record deal, but he's driven to protect freedom of speech, and his words might just place him front and center on a different stage.

Hoylman hopes to get the bill through committee as early as this month.

Notice how narrowly they drafted their legislation so it could only ever be applied to black criminals engaged in ghetto violence? That's too bad because when I first saw the headline, I envisioned it might be a loop hole to allow the dissident right to spread "hate facts" without any fear of persecution. I was already looking forward to seeing performances by the rap sensation "DemographicsRDestiny" headlined by "rap artists" PeteyB, Grandmaster Derby and Big Daddy Sailer.