From: Jeff Stewart [Email him]

Many residents in the D.C./Northern Virginia-region woke up on February's Super Tuesday (which included Virginia's Primary) to find this bit of patriotic imagery inserted into their morning paper... 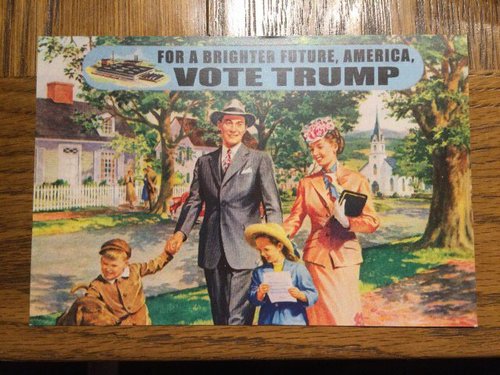 Local 'bright advocates' in the region apparently took to newspaper boxes in the early morning, slipping the image into morning copies of The Hill, Politico and the Washington Post Express, all free papers ubiquitously seen in the hands of D.C. Metro and bus commuters during their morning Beltway-commute. The papers are especially standard for Senate and House-staffers, a group whose job description is apparently to make sure America's future is anything but "bright."

Hopefully, we'll be seeing more of this 'bright advocacy' soon, in D.C. and other areas around the country.

Yesterday morning when I picked up my copy of the Express in Old Town, I found this Trump flier (photo attached) inside it. Is Trump advertising in the Express now? I didn’t think they sold political ads. Anyway, it was weird to find a partisan (and borderline racist) advertisement a general-interest newspaper.

Thought you might find this interesting. There’s just something a little disturbing about it.”

Anyone Else See this Trump Flyer in the Express Yesterday?, February 25, 2016

James Fulford writes: One fascinating point is that a picture of a white American family going to church on Sunday is "borderline racist."