A Reader Reports Aztlan Being Promoted (And Denied) On C-Span 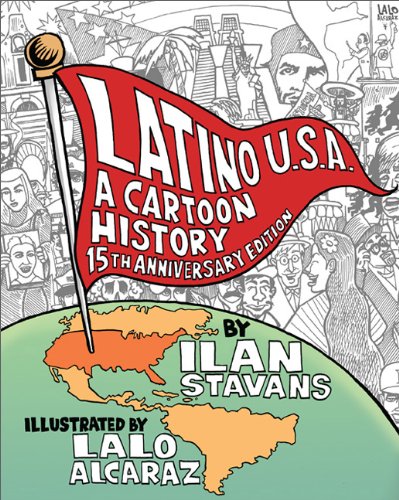 Latino cartoonist Lalo Alcaraz (illustrator of Latino USA, A Cartoon History) presented a group of his political cartoons (5:30) during a C-SPAN discussion on race.

One of the cartoons (above) depicts a wall along what appears to be the oft-discussed Aztlan boundary (6:34).

Alcaraz says the line represents the Spanish border of 1820 to 1840. His dates are inaccurate and self-serving.

If it's 1820, why did he omit Florida? Spanish rule is gone a year later with Mexican independence. By 1836, a giant chunk of land has spun itself off—the Republic of Texas. At that time, the Texas boundary encompassed parts of what is now Oklahoma, New Mexico, Kansas, and Colorado. That land was won on the field of battle. Additionally, the western half of Texas was secured from the American Indians so how was it ever under control of Mexico, Spain, or the Aztecs?

Why does he pick the date 1840 for the other limit? Is it to set the mythical border before California breaks away in a similar fashion in 1847? I find the Aztlan claim to those areas particularly illogical. Exclude those two areas from the US portion of Aztlan and what remains? A barren land then known as The Great American Desert.

During the Q & A session, an American Indian calls out Alcaraz (49:48) for the aforementioned cartoon, claiming the boundary represents Aztlan and is inflammatory and unpatriotic. Lalo denies Aztlan reasserting his previous statement and defers on the issue of offended indigenous peoples.