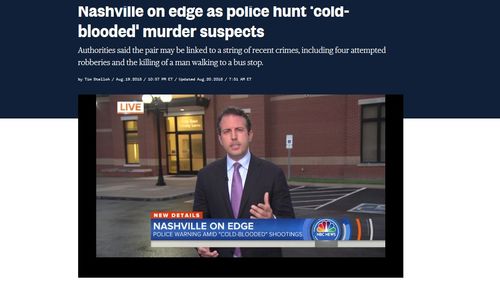 Well this is unusual, from NBC news in Nashville:

"Nashville was on edge Sunday as authorities searched for what a local police official described as a pair of "cold-blooded killers" who allegedly gunned down two people celebrating a birthday. .... Authorities said the suspects in Friday's shootings may be linked to a string of recent crimes, including four attempted robberies and the killing on Tuesday morning of 31-year-old Kendall Rice as he walked to the bus stop to go to work.... Police described the suspects as two black men in their 30s — one of whom has dreadlocks — who were seen in a small Chevrolet. "

Authorities said the pair may be linked to a string of recent crimes, including four attempted robberies and the killing of a man walking to a bus stop.
by Tim Stelloh, NBC Nashville, August 19,2018

James Fulford writes: Better than nothing, but if you count the paragraphs (which I do by pasting them into MS Word and turning them into a numbered list) you'll see that the word "black" appears in the story in Paragraph 19. There's a

picture of a young black man above that, but as the reader point outs, he's the victim. Why do I use this automated method of counting, you ask? Well, I wouldn't bother if it were in Paragraphs 1 through 6, but it's generally so far down that if I didn't, I'd lose count, and we must have accuracy: