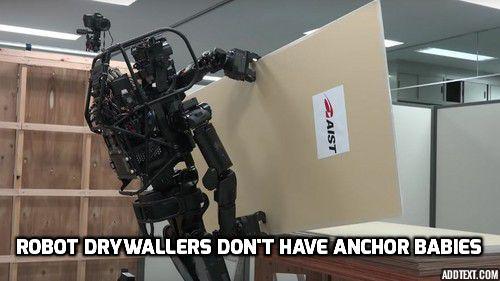 A Reader Proposes Enlisting Robotics In The Fight Against Mass Immigration

Brenda Walker's blog post Automation: Robots Are the Next Generation of Farmworkers

The wonderfully positive Sailer Strategy saved America by giving the gift of President Trump so perhaps it is time for Immigration Patriots to march through another institution and victoriously plant our flag on more ground.

Let me propose an additional positive strategy, I will christen The Robo Strategy.

In reading Brenda Walker's fine articles on the unstoppable robotics wave (the R-wave) instead of worrying about net job loss paired with reckless legal immigration of over 1,000,000 permanent worker visas annually—why not intentionally use the fact of robotization as a new tool for Immigration Patriotism?

3.b. Government departments can propose taxes on highly productive robots. Maybe levy a small Social Security contribution on robots, in return for less regulation on the practice of eliminating jobs by deploying robots.

3.c. Make the robots in America, incentives again. Cut deals with Japanese and German companies to build their robot factories here, get Commerce Secretary Wilbur Ross on this, etc.

3.d. Other robotization incentives to produce net results in keeping America, American. (Fill in the blank ___________ with your own creative suggestion.)

The floor is open for discussion.