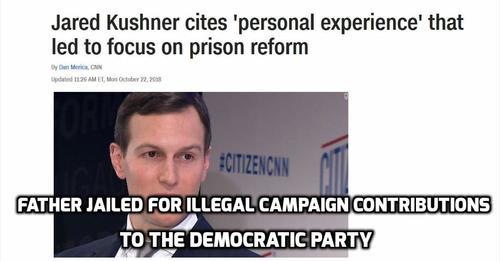 A Reader Insists That It's Not Too Many People Who Are In Prison, But The WRONG ONES

Ann Coulter writes: "Jared and the hip-hop artists currently advising him have decided that too many people are in prison." Ann predicts and argues that the "reform bill" signed by Trump and supported by blacks and left-liberals and even some conservatives, including Michelle Malkin, will result in a "crime wave."

Actually, the contention that there are "too many people in prison" is both true and false. It's true that far too many men and women who are now in jail or prison are not violent and dangerous. In contrast, not nearly enough violent and dangerous male criminals, overwhelmingly black and increasingly Mestizo-Amerindian, are in prison. The crime rates in Chicago, Detroit, Baltimore, St. Louis and Ferguson, and many other cities are proof of that reality.

To give but one example: every year in Detroit alone, nameless and faceless and raceless low-IQ brutes and savages who should be in prison commit hundreds of rapes and murders and thousands of other violent and mala in se crimes -in a states in which Abigail Simon (a 30ish woman who had sex with a 15-year old boy) was sentenced to 8-25 years in prison and a lifetime of electronic parole-monitoring with an ankle-tether/"bracelet" she can never remove (not even when bathing, showering, having sex with a spouse or paramour) and public sex-offender registration with her mug-shot, name, and address on the internet for all too see. [Former Catholic school tutor sentenced for sexually assaulting student, by FOX 17 News, January 14, 2015] And Kathryn Ronk, guilty of the same “crime”, was sentenced to 6-15 years in prison and a lifetime or at least 20-30 years of public sex-offender registration -under a plea-bargain! [Married Catholic school teacher pleads guilty to MORE sex charges after being sentenced to 15 years prison in March, Dailymail.com, May 21, 2015]

First offenders convicted of nonviolent and victimless and mala prohibita crimes, these women and many others have never committed a violent or other mala in se crime in their lives and never will and are not a "threat to society" or to anyone nor even a danger to "re-offend" by having sex with another young man under statutory age. Not a single person in Michigan has been or will be any safer, not one violent or other serious crime has been or will be prevented or deterred, by their hideously draconian/Orwellian sentences.