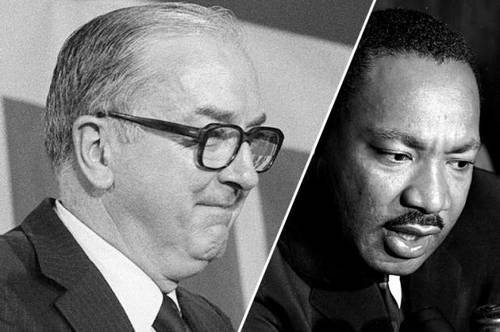 From:  David Hook [Email him]

RE: James Fulford's When Records Are Sealed—A Meditation On Martin Luther King Day

I enjoyed your excellent article. More in this vein needs to be published. Thank you for the link to Helms' speech. I am looking for the 300 page document he distributed to the Senate detailing the surveillance and other essential information. I believe this was not part of the sealed records and hopefully should be available somewhere. Thomas doesn't go back that far on the Congressional Record, and the Helms Center doesn't seem to have much in the way of archives, none that they are making available online at least. Would you have any idea where a copy may be downloaded or purchased? I've had no luck so far.

James Fulford writes: I don't think that report was ever entered in the Congressional Record, but it may exist in the Jesse Helms Center Archives, in which case they might let you photocopy it, or have it photocopied for you, which would cost money. Here are a couple of links that refer to that report:

"The bill faced a somewhat tougher fight in the Senate, however. In an opposition campaign led primarily by Republican Senators John P. East and Jesse Helms of North Carolina, some attempted to emphasize King's associations with communists and his alleged sexual dalliances as reasons not to honor him with a federal holiday. As part of his efforts, on Oct. 3, 1983, Helms read a paper on the Senate floor, written by an aide to Senator East, called 'Martin Luther King Jr.: Political Activities and Associations' and also provided a 300-page supplemental document to the members of the Senate detailing King's communist connections. Some Senators expressed outrage over Helms' actions, including New York's Daniel Patrick Moynihan, who threw the document to the ground, stomped on it and deemed it a 'packet of filth.'"

Since its source was declassified FBI files, some of the material would be here at the FBI website, all though most of that material turns out to be an investigation of the investigators.

But an amazing amount of what the FBI would have called "derogatory" material was published in Parting the Waters : America in the King Years 1954-63

, by Taylor Branch. It's not secret any more. But the modern world refuses to consider it derogatory.