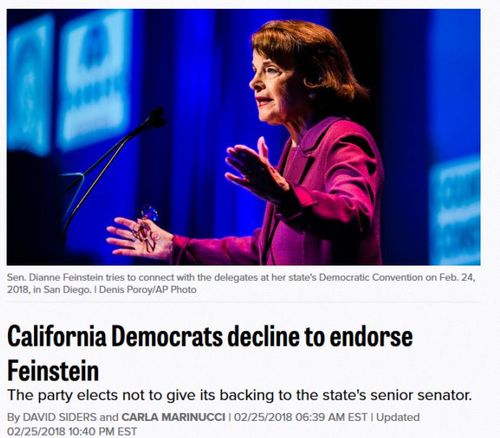 Feinstein's replacement by Kevin de Leon means the chickens are coming home to roost in California as the Hispanics take over the hen house.  I have been saying this since Steven Solarz was replaced by Nydia Velázquez. [Solarz Opponents Resist Calls For Unity, By Mary B. W. Tabor, NYT, August 9, 1992]

Solarz, a nine term Jewish Democratic congressman from Brooklyn, New York thought he could hold onto his seat as his district changed from Jewish to Puerto Rican. The PR's had other ideas.

Yes, they liked his liberal voting record, but they wanted one of their own. He was defeated in a primary. Solarz was out, Velázquez was in. That story was repeated in the South as new black districts saw white Democrats ousted in favor of their black replacements. The Democrats, as their party increasing becomes a party of minorities, will be engaged in internecine warfare among and between racial factions.

Those white Democrats who think they can hold on to their seats because they're "progressive" are in for a surprise.  Will they heed Solarz's ghost when it comes in the night to warn them of impending political doom? I doubt it.