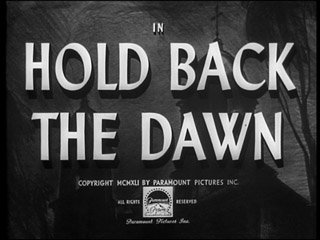 Re: Paul Nachman's blog post:When And How Did The Anchor-Brat Legal Travesty Arise?

From: Thomas McCarthy (e-mail him) 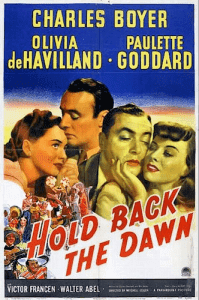 Do you remember, or does anyone else, an old Hollywood weeper from Paramount called Hold Back the Dawn (1941)? It concerned the travails of a number of people, including Charles Boyer as a Romanian-French gigolo (what a stretch that role must have been for Boyer!), trying to get legal admission to the USA from Mexico.

I can't recall all the details of the flicker—it's at least forty years since I saw it—but Walter Abel played a censorious old American official working very hard to keep Boyer, suffering Europeans (Jewish and otherwise), and various poor Mexican peasants penned on the Mexican side of the border before approval for their entry, for which they typically waited years, came from DC. Can you sense a superstorm of preachiness coming on?

One detail that most summaries of the film unsurprisingly omit is the one that struck me most forcibly. I can't summon up all the circumstances that led to this point, but near the end of the movie several of the characters, including Abel, are standing yards from the border. One refugee woman, pregnant, who has waited some considerable time for admission and has spent the entirety of the movie maundering about how she wants her child to be born American, has again been passed over for entrance. Now, however, she is going into labor!

As some bureaucratic detail distracts Abel, she stumbles across the border and proceeds to give birth on US soil. Abel, of course, throws up his hands and declares her a legal immigrant because her child is a native-born American!

I have the nagging recollection that the refugee mom was played by Rosemary DeCamp, but don't bet more than a dime on my recollection's accuracy.

The point is that Hollywood, America's self-appointed arbiter of all things just and proper (and their opposites), assumed that moviegoers wouldn't bridle at this scene. If Paramount's assumption was correct, the anchor baby conceit was already well established in 1941. If it was, heaven help us all.

James Fulford writes: You can watch Hold Back The Dawn on Dailymotion.com. [Part 1 / Part 2]

At 41:44, after the baby is heard crying, a Border Patrolman  says “Let’s get an ambulance to take them back where they belong”, and Abel says “Says you! That kid’s an American citizen." By the way,  I once mentioned this movie in my 2001 article on the Statue of Liberty—Boyer, the Rumanian gigolo whose plan is to seduce and marry an American woman so he can get admitted to America, recites the famous Emma Lazarus poem about admitting "wretched refuse."