A Montana Reader Reports On A Paul Nachman Speech In Kalispell

From: A Montana Patriot [Email him]

Recently in Kalispell, Montana at the Red Lion Hotel, the local ACT! For America chapter hosted its monthly meeting where VDARE contributor Paul Nachman (above) of Bozeman, came to speak about US refugee policy. 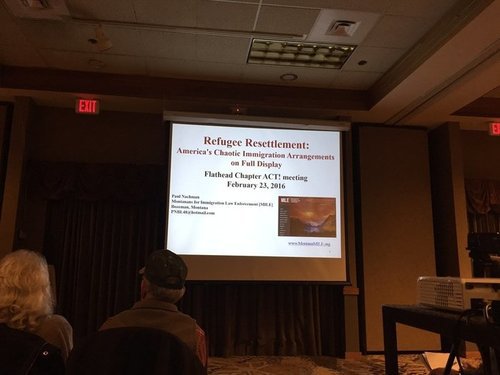 Nachman started the night off by clarifying  that the “purpose” of the United States is not to provide humanitarian welfare of the rest of the world, in either an economic capacity or values capacity. He showed Roy Beck of NumbersUSA’s famous gumball video and clarified that fact that there's an inscription on the Statue of Liberty doesn't means United States was intended to be a dumping ground for the destitute of the world’s populations.

He then proceeded to discuss America’s refugee policy, showing the dynamics between organized charities and “Religion Incorporated” with the US government to relocate refugees into various parts of the United States where they often serve as a new basis for cheap labor and collect vast amounts of welfare benefits often denied to Americans. 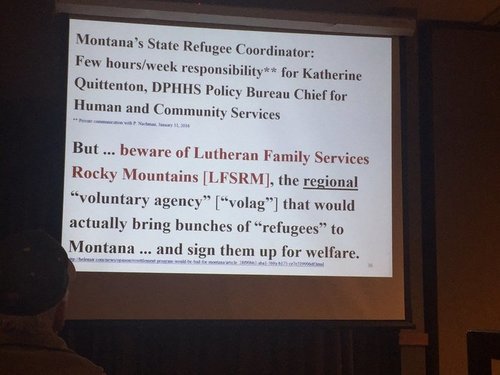 He then also touched on the security aspect of granting unvetted refugees into America, showing that a refugee (Ramzi Yousef)  was involved in the 1993 World Trade Center bombing.

Nachman then moved onto Montana, showing how the United States government has, between the year 2002-2012 has settled a mere 61 refugees, mainly from eastern Europe, into Montana. 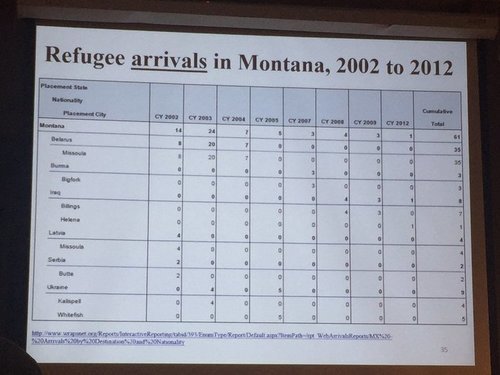 However Nachman clarified that the number can be deceptive as it does not mean there are only 61 refugees living in Montana. Once refugees are granted legal status inside the United States, they are free to move around to wherever they wish, implying that Montana could actually have more refugees, living in Montana on the welfare dole than what official figures show.

Nachman closed with a call to action, declaring that the citizens need to be involved with groups like ACT! And read publications such as VDARE and the Social Contract to stay up to date on current events relating to the refugee crisis and then be politically and socially engaged to make sure their churches and government officials are not working to relocate refugees into Montana.

The event was a huge success, as only about 100 people were scheduled to show up, but it ended up being closer with approximately 500-600 people (including a number of local officials and political figures) and the hotel had to expand the event into the hallways.