It's not just physical memorials that are being desecrated on Memorial Day. It is also institutional memories of White Male icons of recent past history.

The Rise and Fall of Comedian Bob Hope 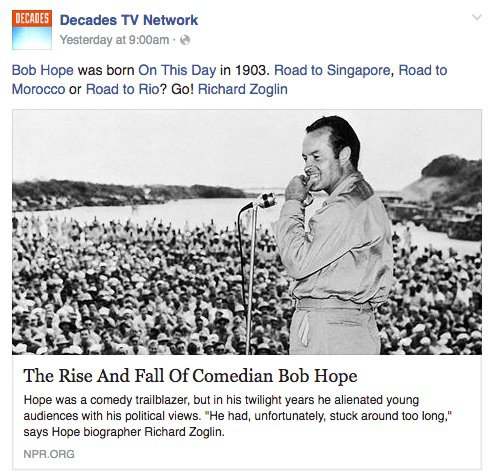 The dateline of the story is November 24, 2014. Now why would NPR decide to post a 2 1/2-year-old story (on Memorial Day weekend, no less) that is a putdown of a man who will always be fondly remembered by veterans of World War II, Korea, and Vietnam? A man who entertained pre-1965 Immigration Act White America on radio, television, and the big screen?

In his 2001 book “Coloring The News: How Political Correctness Has Corrupted American Journalism” William McGowan wrote

"America is at a demographic and public policy crossroads. But just when information about its changing national identity needs to be robust, knowledgeable and honest, the ongoing media crusade for diversity has made American journalism weaker, particularly on complex stories involving race, gay rights, feminism, affirmative action and immigration. Encouraging a narrow orthodoxy that restricts debate and affirms identity  politics, this crusade has fostered a journalistic climate in which reporting is often skewed; facts that call into question a preconceived, pro-diversity script get short shrift; and double standards that favor “oppressed” groups over others become the norm.”

But we're going beyond Political Correctness now. There seems to be a deliberate campaign to smear and denigrate memories of what was once predominately White America.