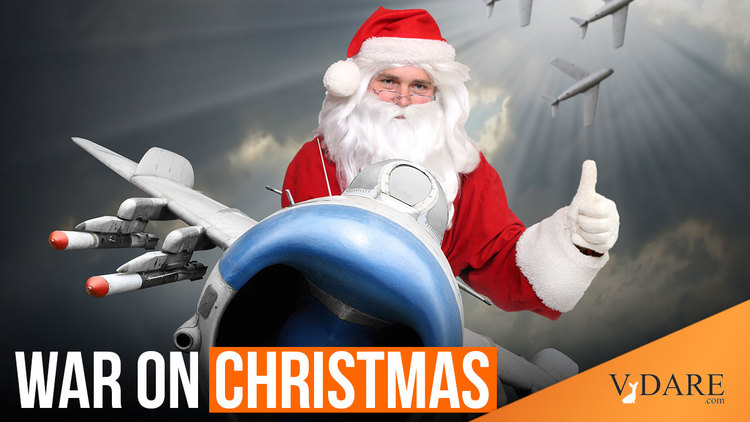 The bad news is that Hannah Claire Brimelow, 8, to whom Peter Brimelow's recent teacher union book is dedicated, is not getting even a "holiday party" at her public school this year. Instead the school is having a traditional New England ...piñata.

The good news: Americans are indeed are fighting back against the abolition of Christmas.  The difference is perceptible over the four years VDARE.COM has been running its competition to find the worst Christmas atrocity. Indeed, WorldNetDaily, which is giving the Khristmaskampf good coverage, recently ran a story about Grinchlist.com, an excellent website founded for the sole purpose of defending Christmas.

The GREAT news: the Conservative Establishment has finally decided it has to insert itself at the head of the Christmas procession. On December 19, even the Wall Street Journal grumpily harrumphed in an editorial about what it called "secularist fanatics," citing cases also reported by several of our readers:

"In New York City, a judge is expected to rule any day on a public-school policy that forbids Nativity scenes while allowing Jewish menorahs and Islamic stars-and-crescents on the grounds that the last two are secular. Likewise in Palm Beach, the city is being sued by residents who have been denied permission to place a crèche on public property that already features a menorah. In the state of Washington, meanwhile, a music teacher who allowed his schoolchildren a Hanukkah song expunged the word 'Christmas' in 'Carol From an Irish Cabin,' replacing it with the words 'white winter.'"

"And if you think labeling our spruces and firs 'holiday trees' is the solution to the season's wars, just wait until the ACLU realizes what the dictionary already makes clear: That the word 'holiday' itself comes from the Old English 'holy day.' "

This "holy day" point, of course is one we've made repeatedly over the last few years.  We're delighted that the Edit Pagers have finally picked it up. Perhaps next year they will admit that the problem is not secularism, but Christophobia.  And that it is exacerbated by…immigration. (How did those "Islamic stars-and-crescents" get to New York City anyway?)

Now, the REALLY GREAT news. National Review, where the War Against Christmas Competition began, only to be dropped after Bill Buckley purged immigration reformers in 1998, has furtively reinstated it! Jay Nordlinger had the no-doubt-thankless task in his National Review Online column:

"Would you do me a favor, readers? If you have an interesting story regarding "holiday" and "Christmas" and the like, would you e-mail me — at jnordlinger@nationalreview.com — to tell me about it? I'd like to do a little compilation."

Subsequently, Nordlinger has said he's writing up the results for National Review treezine. (Anyone got an e-copy?)

Let's put aside all nasty suspicion that this is an Onward Christian Soldiers thing, like Stalin reviving the Russian Orthodox Church in World War II. (Nordlinger himself seems to want to invade Saudi Arabia. Wherever.)  (Note: James Fulford supported the Iraq invasion. Do NOT send him email.) It's still a wonderful improvement from the nadir of 2000, when National Review featured a "Holiday Books" section on its cover.

We urge readers to congratulate Nordlinger – and ask if the magazine will next be allowed to return to immigration reform, to the point of, you know, criticizing Republicans.

We also urge readers to read Tom Piatak's Khristmaskampf essay in the new American Conservative (subscribe!) and thank TAC for its kind crediting of VDARE.COM's competition. They're gentlemen!