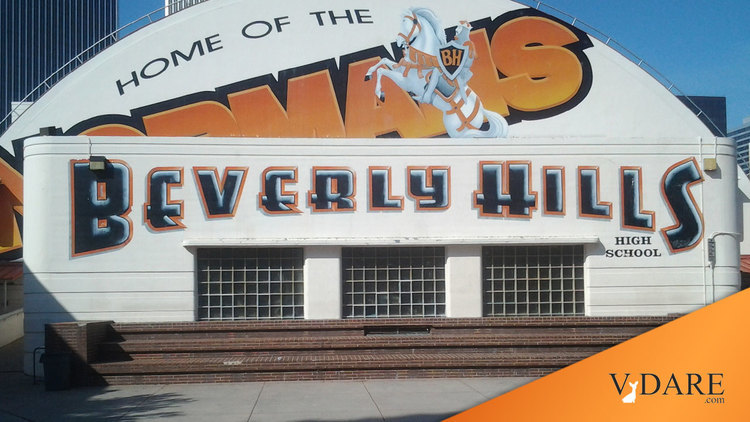 View From Lodi, CA Pittsburgh, PA: Beverly Hills High School Revisited—How It Was Then Versus How It Is Now

Lately, California has been much on my mind.

First, spring here in Pittsburgh—and throughout the east coat—has been a dreary affair. The days have been cloudy and wet. When I watch the weather and see Californians soaking up the sun, I can't help but feel a little nostalgic.

And, second, California and its relentless budget deficit is always one of the top national news stories.

As a native Californian, born and raised in Los Angeles, I expect that I will always have periods when I second-guess my decision to leave the state. The endless predictions of its demise, however, certainly reconfirm the wisdom of my choice.

But the biggest motivation behind my decision to move was the degree to which California had changed between the mid-1950s when I grew up and 2008 when I left.

To be sure, fifty years is a long time and lots of things change during five decades.

The California my grandparents knew was dramatically different than the one their children, my parents, experienced.

But the state's biggest change is unique to my generation: the numbers of foreign-born residents who symbolize the new California.

One of the best examples is California's famous Beverly Hills High School.

But for about a year I did live across the street from the school in a middle class apartment that my family rented just before my father was transferred to Puerto Rico.

So, on weekends, I played tennis on the campus courts. And my friends and I arranged pick up baseball games on the diamond located in the back of the school adjacent to the famous oil well that at one time pumped about 400 barrels a day but was the ongoing source of controversy and legal action.

Most of all, I watched the students come and go. The majority were the well-to-do children whose parents worked, in some manner or another, in the entertainment industry.

But—and this is the difference between then and now—the students were American-born.

Like all California schools, the demographics of BHHS have shifted dramatically.

About 35 percent of Beverly's current student body was born outside the United States, and 42 percent of its students speak a first language other than English.

Many of these students are of Iranian descent whose parents fled the revolution. The school also has a large enrollment of Russian, Israeli, and French students.

Logically, with so many Iranians living in Beverly Hills, several have risen to prominence in the community.

In 2007, Beverly Hills elected Jimmy Delshad, an Iranian-American businessman, as its mayor.  Nooshin Meshkaty, a senior technologist at Pasadena's Jet Propulsion Laboratory, was elected in December 2008 to a one-year term as president of the Beverly Hills Board of Education, which oversees Beverly High.

And recently BHHS became embroiled in a diversity controversy.

For many years, BHHS selected high-achieving students from twelve Los Angeles Unified School District middle schools admitted on diversity permits in an attempt to increase the number of minorities enrolled.

Supposedly, the candidates were selected based on their test scores, grades and writing samples.

Without getting into an extended debate about whether my California from the middle of the 20th Century was a better place than today's diverse California early in the 21st Century, let's just agree that it is—without argument—a different place.

And because California has changed so radically, I grew increasingly uncomfortable in its new environs.

The best and easiest thing for me to do was to leave it behind and satisfy myself with recollections of how California once was.