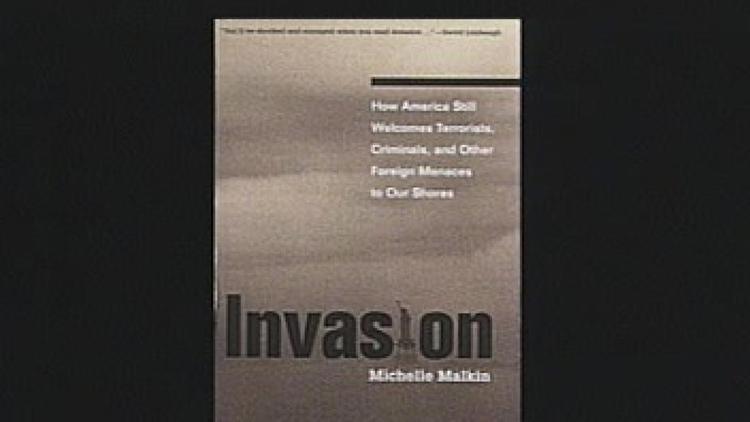 Last week, I wrote about how little progress has been made since 9/11 to make America safe from its enemies.

An 800-word editorial can only give readers the skimpiest outline of how American leaders have taken our country to the brink of disaster.

For the full story, I refer you to syndicated columnist Michelle Malkin's new book, Invasion: How America Still Welcomes Terrorists, Criminals, and Other Foreign Menaces on Our Shores.

For the millions of Americans who are gravely concerned about the country's direction, Malkin's book represents a painfully candid assessment of all of the foolish, selfish and plain old stupid errors in judgment that have brought us to this point.

In the hundreds of conversations that I have had over the last decade about immigration folly, I always remind people that they don't have the vaguest idea just how wide open America is to anyone who wants access.

Read Invasion and you'll know. If you have a hankering to come to America, 57 immigrant and non-immigrant visas await you. You can apply for high-tech visas, student visas, own your own business visas, diversity visas and religious visas.

Maybe you live in a "friendly" country where no visa to come to the U.S. is required. But if not, perhaps you can qualify for the Visa Express Program where normal consular procedures are waived. Three Saudi Arabian 9/11 hijackers entered the U.S. from the "express lane." After nine months of ignoring the problem, the State Department finally eliminated Saudi Arabia.

Another possibility would be to qualify for the "Travel Without a Visa" program. Begun in1952 to resettle World War II refugees, the program was originally intended for airline passengers just passing through the U.S. en route to their final destination.

Half a century later, 5 million visitors came to the U.S. using "Travel Without a Visa." But since the I.N.S. doesn't keep statistics on arriving/departing passengers, who knows where they are?

How else can the U.S. make things easier for any and all comers? If the weather is bad in your country or if you had an earthquake, we'll let you in under the Temporary Protected Status program. Once into the U.S. on any of these visas or under the guise of any of these programs, you can stay as long as you like. The 9/11 terrorists certainly did.

In the extremely unlikely event that someone who aspires to come to the U.S. cannot qualify for any of the above visas or programs, an applicant can always resort to bribery and fraud. Malkin documents dozens of cases in Invasion where corrupt I.N.S. officials sold visa stamps or altered applications. At the dysfunctional I.N.S., money talks.

Visas are cheap and so is American citizenship. Citizenship is for sale through sham marriages, fiancée visas or to some of the cruelest torturers to ever walk the earth.

Malkin reports that human rights groups and investigative reporters calculate that the U.S. is a safe haven for hundreds of the most well known political assassins in history. They were admitted to the country under our refugee or political asylum programs with the full knowledge and assistance of the U.S. military.

Those living among us, now U.S. citizens, are Eriberto Mederos, Fidel Castro's main practitioner of electroshock torture and Kelbessa Negewo, Ethiopian rapist and killer. Other warlords, butchers and "monsters," as Malkin correctly describe them, are in the U.S. as legal permanent residents.

In the book's saddest chapter, Malkin tells the personal stories of victims of Angel Resindez, the infamous "Railway Killer." In and out of the U.S. multiple times since he was fourteen and with a long, long rap sheet, Rasindez brutally murdered, among others, a young medical researcher, a young college student, a young teacher, a young teenage couple, a reverend and his wife and three gentle elderly ladies.

Resindez roamed free because of I.N.S. failures at virtually every level. And while Malkin correctly blames I.N.S. ineptitude for a large part of our immigration mess, others come in for heavy criticism also.

From a very long list, I offer these examples:

Even my synopsis of Malkin's compelling book offers only the most superficial overview the urgent problems she addresses in Invasion.

You'll need a certain amount of courage to read Invasion. While it will help you truly understand what is going on around you, at the book's conclusion you'll be asking yourself, "What happened to America?"