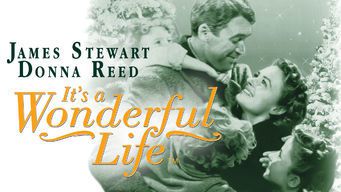 No matter how fast the world around us changes, at Christmas one thing remains constant: Frank Capra's "It's a Wonderful Life" starring Jimmy Stewart and Donna Reed.

The film, reviewed indifferently when it was first released in 1946, bombed at the box-office. But because of repeated televisions showings in the 1970s after its copyright protection expired, it eventually became synonymous with Christmas. Capra and Stewart considered it their favorite feature film. And they weren't the only ones taken with "It's a Wonderful Life." In June 1998, the American Film Institute named "It's a Wonderful Life" as the 11th best movie of all-time in its list of the top 100.

Stewart was drafted into World War II service in 1941. "That's the only lottery I ever won," Stewart was fond of saying. Within a year, Stewart became the commander of his bomber group in the Eighth Air Force squadron.

When he returned to Hollywood in 1945, Stewart was then a Colonel. He promptly received the Air Metal and Distinguished Flying Cross. Active in the reserves until 1968, Stewart retired as a Major General in the United States Air Force.

During his four years of active duty, Stewart flew 25 B-24 missions over Germany. During all of them, he kept in his pocket a copy of Psalm 91 given to him by his father.

Shortly after Stewart died, some of his World War II colleagues wrote tributes about their fellow pilot.

"I had close friends who served in Stewart's B-24 group. They all admired him and said that he chose to lead some of the toughest missions over Germany when many planes never returned."

"There were many celebrities at that time who wanted to be able to say that they served it combat for their country. The majority did the bare minimum to earn an award. Not Stewart. He did not seek special treatment. He did not pick and chose his missions. He flew them as they were scheduled—all were tough, some more than others."

No one ever had a bad thing to say about Stewart. As a conservative in Hollywood, Stewart was at odds with most of his colleagues—especially during the tumultuous Vietnam War years. Stewart's best friend was Henry Fonda, a dove. To keep their friendship alive, Stewart and Fonda agreed not to talk about Vietnam.

Fonda was especially respectful of Stewart's stance as a hawk since the Stewarts' oldest son was killed in Vietnam in 1969.

"There was something so totally real in his own way. How often can you find someone who's spent his whole life in Hollywood but represents so much of America?"

Years ago, a producer working on a documentary about Stewart, asked him how he wanted to be remembered.

Stewart, in the simple, direct manner that was his trademark, answered:

"A guy who believed in hard work, decent values, love of country, love of family, love of community and love of God."

Jimmy Stewart is so much more than a movie star. He was the last true American hero.

[JOENOTE to VDARE.COM readers: It is impossible for me to think about Jimmy Stewart or any other veteran without hoping that they are somehow able to reconcile the enormous sacrifices they have made for America with the illegal immigration agenda so shamelessly pursued by government and elitists. I'm sure that most veterans didn't do battle and die on foreign soil so that the US could become a haven for millions who have no respect for America or the soldiers who served the country so nobly.]