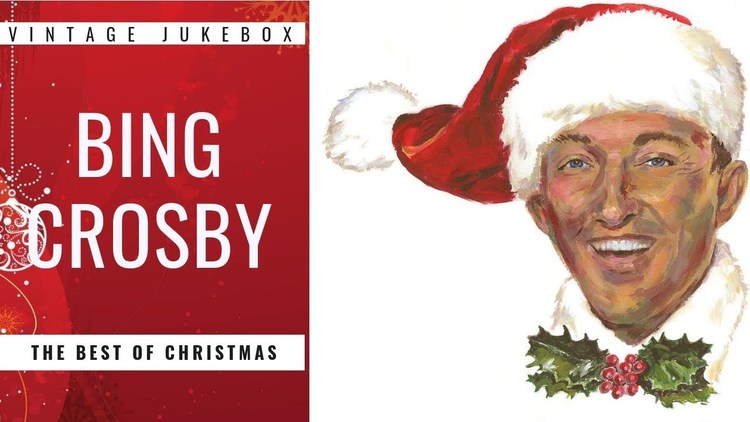 Of the hundreds of Christmas albums I have, the one I play most often is Bing Crosby's The Christmas Songs that features wartime radio transcriptions from his various Christmas broadcasts between 1942-46.

And during these past two Christmases, with our fighting men and women in Iraq and Afghanistan, the sound of Crosby's reassuring voice when he sent best wishes to the soldiers fighting in World War II comforts me more than any words coming out of Washington, D.C.

The Christmas Song disc contains all the holiday tunes Crosby made favorites including his three biggest smash gold record hits: "White Christmas," "Silent Night," and "I'll Be Home for Christmas".

The disc has little gems included like renowned actor Orson Welles, one of Crosby's Kraft Music Hall guests, commented during some on stage patter:

"White Christmas has become something of a classic and no one sings it quite like you."

And for me, an altar boy zillions years ago at the Church of the Good Shepherd where Crosby faithfully attended Sunday Mass, I derive untold pleasure from his brief 1:26 version of Adestes Fideles sung in Latin.

Crosby and Christmas have gone hand in hand since 1936 when Bing began his annual December radio show that lasted until 1962.

A year before his radio broadcasts ended, Crosby's Christmas television shows began. Those aired from 1961 until he died in 1977.

Then there are the Crosby Christmas movies including his two most famous, "The Bells of St. Mary's" and "White Christmas."

Before I started researching this column, I knew the highlights of Crosby's career. But with the invaluable assistance of the Internet, I was able to review Crosby's four and a half decades of superstardom in just a few hours.

My conclusion: Crosby's accomplishments as an entertainer will never be matched.

As Fortune Magazine wrote in 1947,

"Crosby is head man in every branch of American entertainment but sidewalk magic. First in films, first on the air and first on the phonographs of his country men."

If Fortune had written its article in 1957, by which time Crosby had launched his television career, the magazine could have added the small screen to his successes.

A few highlights from Crosby's career include having recorded over 1,700 songs—with 23 gold records. Crosby sold so many records on so many labels distributed in so many countries that no one really knows the total.

Bing charted more number one hits than any artist. A total of 42 of his singles and albums went to the top. In comparison, Paul McCartney—with or without the Beatles—had 31 and Elvis, 18.

Even though some of Crosby's music has been out of print for sixty years, more than 100 of his compact discs are currently available.

Also, Crosby starred in more than 55 full-length movies 23 of which were in the top ten at the box office during the year of their release. Bing was among the leading ten film stars for 15 years and for five straight years from 1944-48, he ranked number one.

During these Christmas days, you will hear Crosby songs wherever you go.

This year, pay special attention to "I'll Be Home for Christmas"—the most requested song at U.S.O. shows in Europe and the Pacific during World War II—and keep a good thought for our troops—including our friend Allan Wall.

"In 1943 the world was at war, and many thousands of American men and women in the service would be spending Christmas far from home. As a special gift to them and their families came this lovely, tender ballad, recorded by Bing Crosby."

Here, as my Christmas gift to you, are the simple lyrics to Crosby's unforgettable song:

Christmas Eve will find me
Where the love light gleams
I'll be home for Christmas
If only in my dreams.