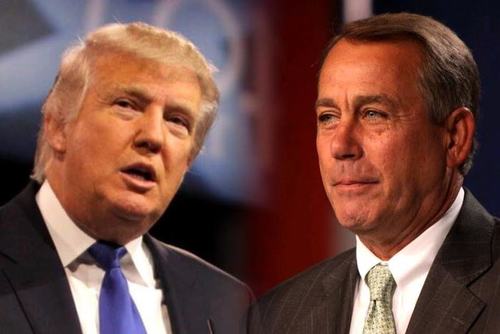 Trump Vs. Boehner: A Slugfest For The Soul Of The GOP

Let me begin with a declarative statement: House Speaker John Boehner and Senate Majority Leader Mitch McConnell represent everything that is WRONG with the national Republican Party. They are quintessential establishment insiders. They, and others like them (John McCain, Lindsey Graham, Chris Christie, Jeb Bush, et al.), are taking the Republican Party to the edge of the abyss. With Republicans like Boehner and McConnell, who needs Democrats?

Ask yourself, What has changed in Washington, D.C., since Boehner and McConnell started running things on Capitol Hill? You know the answer: NOTHING. One could make a credible argument that Boehner and McConnell are leaders in name only. In fact, the argument has already been made that Harry Reid and Nancy Pelosi are still pretty much running things on Capitol Hill.

Breitbart.com accurately reported that the GOP leadership is waging war against conservatives within the party. See the report here: GOP Establishment Wages War Against Cruz And Conservative Voters

Senator Ted Cruz was absolutely correct when he declared on the Senate floor that Mitch McConnell was a liar. See his speech here: Sen. Ted Cruz Destroys Mitch McConnell- July 24, 2015

Talk show host Laura Ingraham was right when she noted that Boehner and Company are nothing more than “a political mafia on Capitol Hill.”

This past Monday, Boehner said this about what it was like dealing with conservatives: “Garbage men get used to the smell of bad garbage.”

Here is the report:Boehner On Dealing With Conservatives: ‘Garbage Men Get Used To The Smell Of Bad Garbage’

Instead of standing up to Obama, Boehner chooses to axe conservative Republicans from committee leadership positions and attempts to bully and intimidate conservatives within his own caucus.

Pick the topic: amnesty for illegals, Obamacare, TPP, deficit spending, government spying, funding for Planned Parenthood, the “Cromnibus” bill, ad infinitum. Boehner and McConnell have sold out the people who voted them into a congressional majority—and the country itself. They are despicable!

Even on an issue as sacred as the right to keep and bear arms, Boehner is a sell-out. Gun Owners of America (GOA) is rightly calling for Boehner’s ouster as House Speaker due to his overt lack of support for the Second Amendment.

In a published statement, GOA said, “As long as John Boehner is Speaker, your gun rights are in danger. After all, remember in spring of 2013, when the pro-gun community was engulfed in the ‘battle of the century’ over the Bloomberg/Obama gun control agenda? John Boehner could have nipped gun control in the bud by pronouncing that gun control would be ‘dead on arrival’ in the House. Instead, he said that the ‘House will consider’ any gun control proposals sent over by the Senate.”

“[Erich] Pratt also pointed to a piece of government-funding legislation—labeled ‘Cromnibus’ by GOA—which Boehner was able to pass on December 11, 2014, with the help of ‘Barack Obama and Joe Biden.’ Through the support of Boehner, Obama, and Biden, the bill—which contained ‘several anti-gun provisions’—passed ‘by a vote of 219-206,’ garnering ‘162 [votes from] House Republicans who campaigned by opposing gun control.’”

See the report here: Gun Owners Of America: Fire Speaker Boehner For His Failure To Stand Against Gun Control

Trump’s position statement says, “The Second Amendment guarantees a fundamental right that belongs to all law-abiding Americans. The Constitution doesn’t create that right—it ensures that the government can’t take it away. Our Founding Fathers knew, and our Supreme Court has upheld, that the Second Amendment’s purpose is to guarantee our right to defend ourselves and our families. This is about self-defense, plain and simple.

“It’s been said that the Second Amendment is America’s first freedom. That’s because the Right to Keep and Bear Arms protects all our other rights. We are the only country in the world that has a Second Amendment. Protecting that freedom is imperative.”

Hooray! Trump acknowledges that the great purpose of the right to keep and bear arms has nothing to do with hunting or target shooting and everything to do with self-defense. And that includes protecting the other rights enumerated in the Bill of Rights from any government that would seek to take them from us.

His position statement also rightly acknowledges the utter failure of firearm and magazine bans. The statement says, “Law-abiding people should be allowed to own the firearm of their choice. The government has no business dictating what types of firearms good, honest people are allowed to own.”

Trump’s statement also calls for allowing military personnel to be free to arm themselves on military installations. And I would hope that he would also support teachers and staff being allowed to be armed on school property as well.

The one part of Trump’s position statement that concerns me is the part about mental health. That caveat could open the door for all kinds of government abuse against an individual’s right to keep and bear arms, in much the same way that a diagnosis of even mild PTSD is currently being used to deny Second Amendment rights to military veterans. “Mental health” is very subjective. To some people, anyone who believes in God or the Bible or the sentiments of our Founding Fathers is “mentally ill.” I hope, at some point, Trump will clarify himself on that one.

The point is, Trump’s popularity is directly related to the way that he is willing to boldly and courageously stand against the Boehner/McConnell, mealy-mouthed, sissified, spineless, jellyfish, pro-amnesty, pro-Obamacare Republican establishment.

Please understand that my mind is still NOT made up about Donald Trump. I still have uncertainties and questions that have yet to be answered. (Perhaps my biggest question is, Will he continue the neocon wars of aggression in the Middle East?) That’s not the point here. The point is, Donald Trump—more than any other Republican candidate—is successfully (so far) mounting a fierce and effective anti-establishment campaign. And you can tell it by the way Boehner and his fellow elitists in the GOP leadership are attacking him.

As far as politics are concerned, more than anything else in this world, it is imperative that the establishment elite in Washington, D.C., are dethroned. Right now, Republican Donald Trump and Democrat Bernie Sanders are the two men who are most effectively accomplishing that task. Rand Paul and Ted Cruz (and to a lesser extent Ben Carson and Carly Fiorina) are also mounting anti-establishment campaigns, but they have not been nearly as effective as Trump.

I know it’s still very early. I realize a lot can happen between now and next summer. But, in a real way, we are witnessing a GOP slugfest between anti-establishment outsiders such as Donald Trump, Rand Paul, and Ted Cruz and elitist establishment shills such as John Boehner and Mitch McConnell.

I pray the outsiders win, because if insiders such as Jeb Bush or Chris Christie win—and with Boehner and McConnell leading a Republican congress—it won’t matter to a tinker’s dam which party is in power: the globalist elite will remain ensconced in Washington, D.C.