One of the great weasel words of our time is the word "troubling." When a Social Justice Warrior tells you that such-and-such a thing is "troubling," you're meant to imagine him sitting there with furrowed brow, agonizing over the possibility that whatever it is might hurt the feelings of someone, somewhere. Given that hurt feelings now blanket the land, and most particularly our college campuses, like edelweiss in an alpine meadow, there is a lot for our moral guardians to find "troubling."

Recently, the President of Williams College, a chap named Adam Falk [Email him] got to hear of a speaking invitation extended to me by the (black) leader of a student group, looked me up, and took to the fainting couch. When he had recovered sufficiently, President Falk disinvited me, proclaiming of me:

Many of his expressions clearly constitute hate speech.

And I really should have known better. In the context of higher education in a society under strong ideological control, I got all the necessary insights thirty-four years ago, teaching college in communist China.

But these petty events have got me looking at U.S. websites like FIRE, campusreform.org, and heterodoxacademy.org. Here is a titbit on the campus scene at large, from the Campus Reform website. 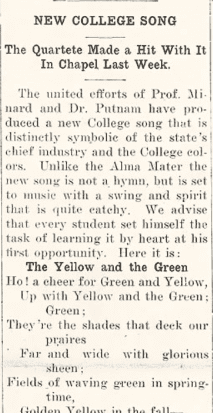 The moral guardian here is North Dakota State University President Dean Bresciani. His university, like most, has a school song. They've had it since 1907, which is kind of impressive. [NEW COLLEGE SONG, The Spectrum, November 12, 1907]

President Bresciani [Email him] has been reading the lyrics of this song, and what he read was not pleasing to him. It was in fact, yes, troubling.

The problem seems to be that only the first stanza of the school song is ever sung. Nobody's looked at the other stanzas since Jack Pershing arrived on the Western Front to trouble the Kaiser's general staff.

You can hear that first stanza sung on YouTube. I must say, I think it's rather a pleasant tune, and not in the least troubling.

What President Bresciani found troubling was the third stanza. I won't attempt to sing it, but here are the lyrics. Prepare to be troubled!

Hushed upon the boundless prairies

Is the bison's thund'ring tread,

And the red man passes with him

On his spoilers' bounty fed.

But the Norse, the Celt and Saxon

With their herd increase, and find

Mid these fields of green and yellow

Plenty e'en for all mankind.

Concerning the phrase "spoilers' bounty," there's been a slight semantic shift this past hundred and eight years. That word "spoiler" is understood to mean "de-spoiler"—someone who loots or pillages. So the red man looted the prairies by killing all the bison, which accounts for their thundering tread being hushed. The Norse, the Celt, and the Saxon are much better at husbandry, and have made the prairies bloom.

It's all a bit of a whitewash. No doubt the Plains Indians would have hunted the bison to extinction if they'd had the technology to do so, but they didn't. To quote the 1889 Hornady Report,: "The primary cause of the buffalo's extermination, and the one which embraced all others, was the descent of civilization.”

I suspect that it's not that minor historical inaccuracy that troubled President Bresciani's rest, but the implied superiority as food-providers of the Norse, the Celt, and the Saxon.

He doesn't actually tell us that; but what he does tell us is smothered in so much PC babble, it's hard to know what it was that furrowed his brow.

What should a college president do to ease his troubled mind in such troubling circumstances? President Bresciani did two things, he tells us.

First, he ordered the immediate removal of all but the first stanza from college websites and publications. That's why if you google for that third stanza, some of the links that come up will say "page not found."

Second—and a bit contradictory, it seems to me—he told his Provost and his Vice President for Student Affairs to, quote, "bring together a faculty, staff and student group to study the song and offer recommendations on its appropriateness," end quote.

Why? He's already destroyed all vestiges of the song, except for the un-troubling first stanza.

It seems a lot of trouble to go to over words nobody ever sings. Still, the Norse, Celt, and Saxon must be put in their place. Heaven forbid that the impressionable young minds of Fargo and Bismarck should ever be troubled by the idea that civilization is better than barbarism. That would be really troubling.

Perhaps it would be best to just replace the school song altogether. Here's a suggestion for something totally non-troubling. You'd have to check with the authorities in South Africa, but I believe "Kill the Boer" is out of copyright. [Clip: Jacob Zuma, "Kill the Boer."]