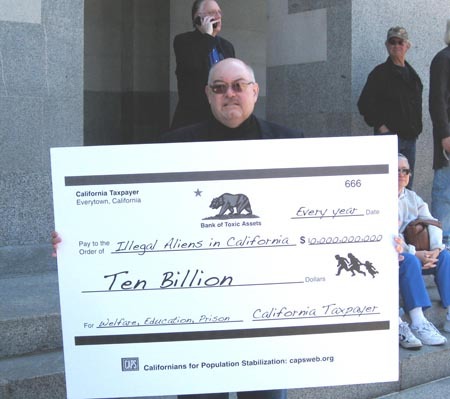 Thoughts On The Sacramento Tea Party—Immigration Dimension Must Be Added!

On April 15, I attended the Sacramento Tea Party on the Capitol steps along with my friend and colleague, Rick Oltman, and at least five thousand other angry and concerned Californians. We made a giant check reminding taxpayers of the billions of dollars wasted annually on social programs for illegal aliens (photo).

It was a beautiful spring day. The crowd was friendly, but the tone was urgent.

In California, we have double-barreled budget trouble; both Washington and Sacramento are in slash-and-suck Dracula mode to gobble up all available treasure from our pockets and piggy banks. While many Tea Parties around the country were focused on future taxes from the Obama-Congressional crazed spending spree, higher taxes are here and now in this state, with more to come.

On April 1, the state sales tax increased by one percent, a terrible turn of public policy with the unemployment rate now at 11.2 percent, up from 6.4 percent in March 2008. Talk about falling off a cliff.

In February, a highly contentious budget was passed that raised taxes to cover part of the $42 billion hole. The legislative package included $15 billion in spending cuts, $11.4 billion in borrowing, $12.8 billion in taxes and about $2 billion of federal stimulus funds. But despite the legislators grinning and high-fiving in self-satisfaction over the new budget, it was only a temporary fix and depends on several tax-increasing propositions which will go before the voters on May 19.

Unlike the familiar, unpredictable earthquake disasters we Californians know and understand, the budget disaster has been like a Mississippi flood that approaches in slow motion, takes weeks or months to pass through, and afterwards you are left with a total wipe-out.

Those in power, particularly Governor Arnold Schwarzenegger, have been spinning a web of lies in order to avoid the politically painful steps that must be taken to get California's fiscal house in order. Schwarzenegger was voted into office in a historic recall of Democrat Gray Davis, because of voter anger against Davis' mishandling of the budget and over his signing a bill to award drivers licenses—highly coveted state identification—to illegal aliens.

Candidate Schwarzenegger promised to repeal the hated DLs, which he did. But he also promised to fix the budget, which he did not do. In fact he has done a far worse job of financial management than Davis. The first thing Arnold did in office was to borrow up a storm with the promise that the strategy would somehow help the state get a grip on its money problems. He used the increasingly common political tactic of kicking the can down the road, hoping some extra tax money will turn up.

That possible good fortune is not without precedent in California. Larger-than-expected funds did indeed pour into state coffers during the dot-com boom. But hoping to get lucky is no way to run a state government.

Three decades back, California led the first tax revolt. The late Howard Jarvis was not merely a bit player in the original Airplane movie; he was also an author of Proposition 13, a successful 1978 initiative that lowered state property taxes. Prop 13 was the beginning round in a nationwide populist groundswell against crazed government spending. The Howard Jarvis Taxpayers Association remains as a voice for his philosophy.

So while California may look battered by demography-changing immigration, and has rapidly flopped from a Republican bastion to a hopelessly blue state—given that Republicans are too cowardly and stupid to adopt the Sailer Strategy and mobilize their white base—there is still a strong tradition of revolt against taxation run amok.

Of course, taxation is just the symptom. The disease is SPENDING. And California has a very bad case, complicated by excessive borrowing (i.e. issuing bonds) which creates postponed taxes with interest.

As a result, the Golden State was downgraded in March to rock bottom in America as a bond issuer. Last year the US Census found California to be the "highest-spending state", and by half as much again as the runner-up New York.

The San Jose Mercury News, hardly a voice of conservatism, presented a straightforward analysis of what has happened in Sacramento in recent years [California budget mess: Where did our money go?, February 8, 2009]

"But over that same period, population growth and inflation together grew by only 21.5 percent.

"If state spending had grown only at that rate, it would have reached $92.7 billion last year. Instead, Schwarzenegger and the Legislature spent $10.2 billion more. "

Some of the winners in excess spending have been illegal aliens at a yearly cost of $13 billion, America's highest paid teachers and the country's highest paid prison guards. The losers were taxpayers, small business owners and anyone disturbed by government grown entirely too big.

At the Tea Party, few politicians were invited to speak. But one was Tom McClintock, who was elected last fall as the Republican Congressman from District 4 after serving 22 years as a state legislator. A long-time budget hawk, McClintock got the Tea Partiers riled up by reminding them of California's recent history of tax increases by politicians who promised otherwise. [Watch his speech on YouTube].

McClintock urged the people to go home and organize, first by opening up the website RecallAdams.org and helping out with the petition. The next thing to do, he said, was to work against Schwarzenegger's tax-increasing propositions which will be decided in the special election on May 19.

Bear in mind this was a Republican Congressman urging the recall of a fellow Republican, Anthony Adams, because Assembly Member Adams earnestly pledged not to support increased state taxes, but broke his promise by voting Feb 19 for the Governor's plan.

Rep. McClintock was likewise clear that conservatives should work against the Republican governor regarding his tax schemes.

Some of the most serious hell-raising in the area of tax revolt has been nurtured with tender loving care by the SoCal talk show guys John and Ken. (As I wrote in a 2004 VDARE article, they created the "Political Human Sacrifice" campaign to oust perfidious Republican David Dreier, who claimed to be tough on illegal immigration enforcement, but was really a weakling at best. They did not succeed in getting him voted out, but got his attention enough to raise his recent immigration voting grade to A-.)

John and Ken's new campaign is called "Heads on a Stick". This refers to a rude head-choppy theme of punishing lying politicians—nearly all of whom happen to be Republicans. Several GOP politicians are the objects of anger because they pledged heartfelt allegiance to no tax increases and voted for them anyway.

California Democrats, by contrast, have said all along they would raise taxes to enable their spendaholic ways. Whatever evil you can rightly ascribe to them, the Dems have not been liars or hypocrites—on this issue at least.

Listener response to John and Ken's broadcast railing was enthusiastic. Listeners contacted each other on the John and Ken Facebook page and organized their own local recall committees and websites. (See the list here.) John and Ken now broadcast a daily hour of tax revolt at 5 pm. (Sound archives including podcasts are found here.)

On March 7, John and Ken held a tax revolt rally in Fullerton which was broadcast live. At least 8000 people showed up (more like 15,000 according to John and Ken) with signs and attitude, happy to chant "Heads on a Stick" and smash up Arnold Schwarzenegger movie DVDs and videotapes with a sledgehammer.

What could be a better way to protest crazed spending? (Listen to the show online: Hour One, Hour Two, Hour Three, plus a Recap).

Some listeners at the Fullerton event wore homemade buttons showing the amount of additional tax bite on their family from the new budget. The Sacramento Bee provided an online worksheet where people could fill in their personal financial info (family income, value of cars, number of dependents, etc) and get their new tax bill.

Nothing focuses the mind like thousands of dollars pulled from your pocket.

When leftist pundits say the Tea Parties and anti-tax activity are a project of the GOP machine, they reveal a stunning ignorance. If anything, the theme throughout has been the fury of fiscal conservatives, including many registered Republicans, against elite GOP apparatchiks.

The California GOP, in fact, is running scared. The party honchos had lined up in favor of the RINO Governor's tax increases in the ballot props, but by mid-April, a flood of angry calls and emails had convinced them a reversal was in order:

"The California Republican Party decided Saturday to oppose all six measures on the May 19 ballot, including a spending limit and temporary tax hike proposal championed by GOP Gov. Arnold Schwarzenegger and Assembly Republican Leader Mike Villines.

Proposition 1A has been falsely marketed as a spending cap, but it actually extends taxes. The non-partisan Legislative Analysts Office largely agrees with that point in the paper The Fiscal Outlook Under the February Budget Package, particularly in Figure 7 which has the heading "Tax Increases Would Be Extended by Passage of Proposition 1A."

These policy details may verge into the wonky, but politicians of both parties have used confusion, complexity and outright lies to fool California voters.

And to what end? To continue the current unsustainable regime of failure? Why many of the Republicans should partake so willingly in a scheme that will marginalize the party still further if not supply the coffin nails is a puzzler.

On the morning of April 22, reports appeared in the press that the Assembly leadership had decided to award $551,000 in pay raises to 136 Assembly staffers, a bonehead act of political stupidity if ever one was.

But by dinnertime, the raise was off the table, with Speaker Karen Bass (D) and Minority Leader Mike Villines (R)... "acknowledging that the pay hikes sent the wrong message at a time when the state is in financial crisis and tens of thousands of other government employees have had their salaries cut. "

The LA Times story, Assembly leaders withdraw staffers' pay hikes [by Patrick McGreevey, April 23, 2009], did not mention how the top pols' bubble of self-imagined privilege evaporated in a few short hours. But we can reasonably assume that outraged California taxpayers phoned in great numbers.

The day's misadventure contained elements of disgust and hope. California government officials still believe deeply that they should reward themselves handsomely and spend money the state doesn't have on goodies for designated classes of victims and special interests. However the pols can respond appropriately when smacked hard with a two by four.

The Tea Parties of April 15 were a moment of reinvigoration for many Californians on a familiar subject. Many people at the rally I attended emphasized that continuing action was necessary to force the legislators to get a grip on their spendaholic ways. However, the demographic forces of immigration are running toward more social spending, not less.

The bad choices of California government demonstrate the danger of too many spendo-Dems and Mexophiles in combination.

Taxation is the headline today. Immigration must be the headline tomorrow. The friends of sovereignty must utilize citizen outrage as more of a teaching moment about immigration than it has been. There were only a handful of signs at the Tea Party that referred to the cost of legal and illegal immigration. St Still, our big check sign with its prominent mention of immigration got a lot of positive attention from fellow tax protesters.

Hopefully the well-educated readership of VDARE.com can get the word to the public at the next Tea Party (July 4?) through signs, letters to the editor and, calls to legislators—and emailing this article to friend!

The tragic experience of California is a reminder: demography is destiny.. Immigration suicide must be resisted at all costs.