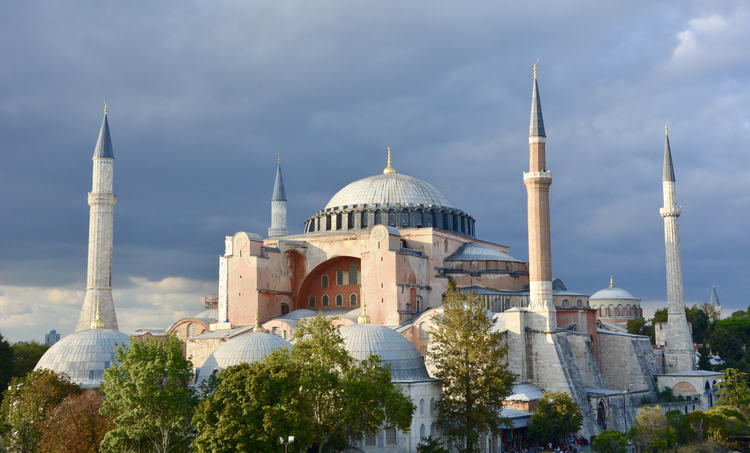 “Though Years, Though Centuries Shall Pass, They Shall Be Yours Again.”

In the exotic Turkish night, what seem to be fiery sparks whirl wildly above the looming bulks of Hagia Sophia and the Blue Mosque, both huge domes attended by soaring minarets. Studying them from one of Istanbul's many rooftop restaurants, we eventually realize that they are seagulls, catching the great buildings’ illuminating floodlights. This remarkable city has, unexpectedly, the feel of San Francisco, surrounded by salt water—the Sea of Marmara and the Bosporus, the long narrow strait that divides Europe and Asia and connects the Black Sea with, ultimately , the oceans of the world.

But real fiery sparks have so many times whirled above Istanbul, visiting which is the one of the side benefits of Hans-Herman Hoppe and his wife Guelcin’s Property and Freedom Society conference, held annually in her beautiful Karia Princess Hotel in Bodrum—Halicarnassus to the Ancient Greeks.

Istanbul was founded as Byzantium in the 7th century B.C., became Constantinople after Constantine the Great made it the capital of the Roman Empire early in the 4th century A.D. and remained the capital of the Byzantine Empire, which endured after the fall of Rome for almost a thousand years. In 1453, the city was captured by the Turks, after an heroic siege in which Constantine XI Dragases, the last Emperor of Rome, died fighting in the breach. Then it was the capital of the Ottoman Empire. Since 1923, as Istanbul, it has been the largest city of the Turkish nation-state, salvaged by Kemal Ataturk from the multicultural imperial wreckage. (Hint! Hint!)

The PFS program is now the Byzantium of paleolibertarianism, and you can find yourself listening to highly technical discussions on “The Ethics of Default” and “The FED and the ECB: Banksterism Compared” along with culturally conservative analyses of China etc.

But tonight what fascinates me is the evanescence of ethnic presence. From prehistoric times, this land was Greek. Istanbul was substantially Greek until World War I. The Greek presence in what is now western Turkey, including Bodrum, was only ended by drastic ethnic cleansing after World War 1.

VDARE.com’s James Fulford recently noted that the inscription on the monument at San Jacinto in Texas reads:

“Measured by its results, San Jacinto was one of the decisive battles of the world. The freedom of Texas from Mexico won here led to annexation and to the Mexican War, resulting in the acquisition by the United States of the states of Texas, New Mexico, Arizona, Nevada, California, Utah, and parts of Colorado, Wyoming, Kansas, and Oklahoma. Almost one-third of the present area of the American nation, nearly a million square miles of territory, changed sovereignty.”

Because of immigration policy, we must face the possibility that the verdict of San Jacinto will be reversed.

For a while. It is not merely because I know Richard Spencer’s formidable Russian-born wife that I wonder if any of these verdicts are permanent. (Remember the Western Allies finally acceded to Russia’s long-resisted ambition to control Constantinople in a secret 1915 agreement that was disrupted by the Bolshevik Revolution). All that matters is will, and chance.

Which is the sting in the last lines of The Last Mass in Hagia Sofia, the haunting Greek folk song about the ceremony that was actually held at midnight, May 28, 1453, two hours before the final Turkish assault began:

The Holy Wisdom, the Great Church, is ringing out the message,

For every bell there is a priest, and for every priest a deacon.

To the left the emperor is singing, to the right the patriarch,

And all the columns tremble with the thunder of the chant.

And as the emperor began the hymn to the Cherubim,

A voice came down to them from the sky, from the archangel’s mouth:

Cease the Cherubic hymn and let the sacred objects bow;

Priests take the holy things away, extinguish all the candles;

God’s will has made our city now a Turkish city.

But send a message to the West, and let them send three ships:

The first to take the Cross, the second to remove the Gospel,

The third, the finest, shall rescue for us our holy altar…

The Holy Virgin was distressed, the very icons wept.

Be calm, beloved Lady, be calm and do not weep for them;

Though years, though centuries shall pass, they shall be yours again.

John Derbyshire On Understanding China And The Chinese

[VDARE.com Note: The semi-polyglot Derbyshire made an effort to learn the Turkish language, including  the useful phrase "ben gerici imi?im — "I am said to be reactionary."]

Peter Brimelow (email him) is editor of VDARE.COM and author of the much-denounced Alien Nation: Common Sense About America’s Immigration Disaster, (Random House - 1995) and The Worm in the Apple (HarperCollins - 2003)