The Would-Be Dhimmis Of Duke: Why Did They Cave? 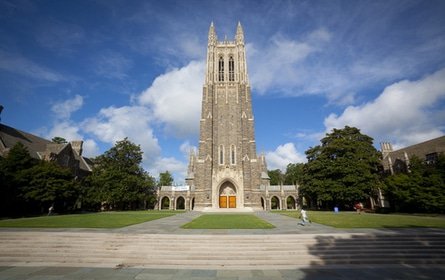 Duke Chapel: Not Yet A Minaret

The historic American nation won a victory at an unlikely place—a university campus. Of course, it didn’t take long for the Main Stream Media to blame it on “threats.” The truth is it came from the kind of political and cultural self-preservation reflex that America desperately needs.

Less than one week after the Islamic terrorist attacks in France, Duke University happily announced that the Duke Muslim Students Association would broadcast the call-to-prayer from the Duke Chapel bell tower [Muslim Students at Duke to Begin Weekly Call-to-Prayer, Duke Today, January 13, 2015]. But after only two days, the school reversed itself, a victory for Americans who don’t want their communities resembling the Third World more than they already do. [Duke Announces Change to Friday’s Call-to-Prayer, Duke Today, January 15, 2015]

After the reversal, there were claims that “threats” were responsible for the decision. But like so many campus rape and noose hoaxes, the “threats” were probably imaginary. A close look reveals that there is something suspicious about the timing of the claims.

On the afternoon of Thursday January 15th, Duke’s “vice president for public affairs and government relations” Michael Schoenfeld (email him) announced, apparently with a straight face, “that what was conceived as an effort to unify was not having the intended effect.” This announcement was repeated by WUNC, North Carolina Public Radio, at 3:58 p.m. The initial report mentioned no threats. [Muslim Duke Student: ‘I Hope We Can Be Visible, January 15, 2015]

Yet according to a report in the Washington Post, Schoenfeld was mentioning a “serious and credible” threat by “Thursday night.” The director of Duke’s “Islamic Studies Center,” one Omid Safi, was repeating this claim by “Thursday night.” [Duke University reverses decision, cancels weekly Muslim call to prayer, by Susan Svrluga and Michelle Boorstein, January 15, 2015]

The timing is a smoking gun. If threats were the real reason for the reversal, that would have been reported first.

The Charlotte News Observer noted this discrepancy without comment. As reporter Jane Stancill put it:

At the time [of the initial announcement], they [Duke officials] said the effort to unify was not having the intended effect. They later cited threats and serious concerns about safety.

So why the time lag?

The answer may be the university simply decided it needed an excuse so it could pin the decision on something other than public outrage. The university provided no description of any actual threat, nor has the MSM reported an actual threat. According to an article from the Associated Press, Duke vice president Schoenfeld said there were “concerns about safety and security, but he declined to elaborate on whether any specific threats had been received” [Duke cancels Muslim call to prayer; cites opposition, safety, by Jonathan Drew, January 16, 2015].

It’s hard to avoid the possibility that the school fell back on the vague explanation of unverified “threats” to explain its retreat.

Of course, now the myth has taken over reality. Reporters are even trying to compare those who protested the Muslim call to prayer to religious terrorists. [For Whom the Muezzin Calls, by David A. Graham, The Atlantic, January 15, 2015]

But the reality is that Duke is an excellent example of how public pressure, especially from alumni, can force even Leftist universities to change course.

The key activist in this case: evangelist Franklin Graham, who wrote a Facebook post on January 14. And Graham knew how to get the school’s attention: threaten its funding:

Duke University announced today that they will have a Muslim call to prayer from their chapel bell tower every Friday. As Christianity is being excluded from the public square and followers of Islam are raping, butchering, and beheading Christians, Jews, and anyone who doesn’t submit to their Sharia Islamic law, Duke is promoting this in the name of religious pluralism. I call on the donors and alumni to withhold their support from Duke until this policy is reversed.

Evidently, some donors and alumni agreed.

Even the would-be dhimmis of Duke (dhimmi is Muslim for “second-class citizen” ) pointed to pressure from donors and alumni as the explanation. Christy Lohr Sapp, associate dean for religious life and one of the organizers of the call-to-prayer idea, griped that the university administration is “answerable to a different level... the Trustees, relationships with the medical center, relationships with alumni, they have that to deal with in a way that we [activists] don’t.” [Duke reverses decision to hold Muslim call-to-prayer from Chapel bell tower, by Emma Baccellieri, The Chronicle, January 15, 2015].

Who thought up this idea anyway? As one Duke Muslim student wrote in the school paper, “The idea [to allow the Muslim call] was suggested by Christy Lohr Sapp, a Christian” [Adhan, by Abdul Latif, The Chronicle, January 22, 2015].

Sapp [Email her] is associate dean for religious life at Duke, and teaches theology. The picture below tells you everything you need to know about her.

It should come as no surprise that a white liberal who worships diversity instead of God is responsible for this debacle.

Not everyone at Duke regards religion as simply an excuse to mouth platitudes about diversity and inclusiveness. Duke’s Divinity School Dean Richard Hays wrote a letter [read here] to the school that politely alludes to this significance of the call:

Any decision to permit the use of a prominent Christian place of worship as a minaret for Muslim proclamation will, in our time, have immediate global repercussions. Any discussion about such a proposal should take into careful account the perspective of millions of Christians living in Islamic societies where their faith is prohibited or persecuted.

[I]t should be understood that Christians in the U.S. will want to show solidarity with fellow Christians in very difficult circumstances, and be sensitive to how our actions here will be experienced by them.”

Imagine that—solidarity among a group that hasn’t been officially certified by MSM as “victims!”

The debacle of the Dhimmis of Duke is a classic case of hypocritical identity politics. It was so awful that even the Respectable Rightists at RedState mocked that “Duke University becomes a Parisian suburb” [by streiff, Jan. 14, 2015]

After all, this is the same school that refused to allow Chick-fil-A to operate on campus because of the company’s perceived opposition to gay marriage [Selective Outrage? Duke University Ousts Chick-fil-A But OK’s Muslim Call to Prayer (Even Though Islam Condemns Homosexuality) by Thomas Lifson, FoxNews, January 15, 2015].

And, of course, the school that enabled the infamous Duke Rape Hoax.

But Duke University backed down, and backed down quickly, when it was called out. Even the modern university, the citadel of the American Left, needs the historic American nation to remain silent. After all, Duke is dependent on conservative alumni for funding and promotion.

Patriots should learn the lesson that even the supposed strongholds of the Left aren’t as invincible as we think they are—and that when patriots start acting like activists, victory can come more easily than expected.