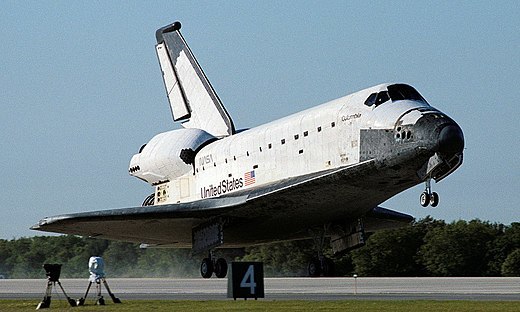 The Space Shuttle: Another Government Failure

Would you take seven family members on a cross country trip in a 22-year old car that had clocked several hundred thousand miles? The car would be too unreliable, you say? It would experience brake failure on a mountain road or overheat in a scorching dessert. You wouldn't risk it?

The U.S. government would. That's how we lost the space shuttle Columbia and seven astronauts. Columbia had been around the world many times and had undergone the stresses and strains of 27 escapes from the earth's gravitational pull and 27 re-entries of earth's atmosphere traveling at 25 times the speed of sound. That is too much wear and tear for a vehicle with no margin for error and 2.5 million parts.

NASA is having to conduct a space program on a shoestring. That's why we lost the astronauts. That's why the U.S., on the verge of war, suffered a tremendous blow to its prestige when Columbia broke apart upon reentry.

Space isn't important enough for the policymakers in Washington. It is not a program politicians can use to buy votes. Better to pour the money, as President Bush proposed in his state of the union address, [SOTU address text video audio]  into a rat hole of sexual promiscuity by going to war against AIDS in Africa.

A truth-teller could say that the war against AIDS consists of keeping infected people alive longer with expensive drugs so that they can continue to be sexually active and further spread the disease. According to UN projections, sub-Saharan Africa will experience 55 million AIDS deaths between 2000 and 2020. Africa's graveyards are already full. The dead are being buried vertically.

AIDS is entirely a result of sexual behavior. It is insanity to make U.S. taxpayers responsible for other people's sexual behavior - in the meantime starving NASA and killing highly trained astronauts.

The government's job is to set priorities and to treat scarce resources with respect. Assuming responsibility for Iraq, the Middle East, and AIDS in Africa is the way to go broke fast.

Investigators and congressional committees will search into the cause of the Columbia disaster in order to distract the public's attention from the obvious: NASA's $14.5 billion budget is not enough money to do its job. The priority placed on NASA by the government's budgeteers is so low that our president and elected representatives had rather spend money subsidizing sexual promiscuity in Africa.

During Columbia's last launch it was observed that insulation on the external fuel tank broke loose, striking Columbia's left wing. Why didn't Columbia dock at the space station before reentry in order to check for damage?

The answer to this question shows the damage budget constraints have done to NASA. The astronauts aboard Columbia were not trained for space station docking. Columbia lacked the adapter collar necessary for linkup to the station. The astronauts were not sufficiently trained in spacewalk to examine the ship even if they had been trained to dock it.

If this isn't operation on a shoestring budget, what is?

NASA is not merely underfunded. According to the Budget of the U.S. Government for Fiscal Year 2003, "the integrity of NASA's merit-based research is seriously eroded by the practice of congressionally directed spending known as earmarks. NASA has suffered from a surge in both the number and cost of earmarks." Earmarks have risen from 20 in 1997 to 120 in 2002.

Many earmarks have nothing to do with NASA's mission: "For example, the Congress earmarked NASA's current budget to fund corporate jets, college dormitories, libraries, and museums."

According to the government accounting office, waste and fraud in the federal budget is larger than NASA's budget. In May of last year the Office of Management and Budget announced that the federal government had doled out $20 billion in health, housing and food benefits to people not entitled to them. Erroneous Medicare payments alone were almost the size of NASA's budget.

When it comes to waste, the GAO barely scratches the surface. The federal education budget is several times larger than NASA's. What's to show for it? According to a recently released report, a 1955 high school education is the equivalent of a university education today. In 1955 there was no federal aid to education.

Science has more to offer us than war. Let's spend $100 billion on regime change in the Middle East after attending to the safety and survival of the brave men and women we send into space.